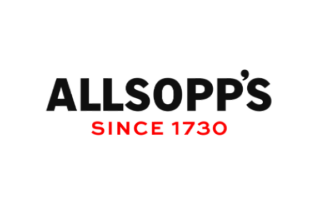 Allsopp’s Brewery is a famous name in British brewing history and was originally founded in 1730. After a change of ownership in 1959, the Allsopp’s name all but disappeared.

Now, after sixty-two years in the wilderness, Allsopp’s has returned. Jamie Allsopp, seven times great grandson of pioneering brewer Samuel Allsopp, is fulfilling a lifelong dream of restoring the ales that made his family’s name, to their former glory. With the help of Burton-style brewing expert Jim Appelbee, they have skilfully adapted some of the family’s original recipes to work for today’s ingredients, methods, and tastes.

Jamie’s forebears dedicated themselves to perfecting their Pale Ale. Balanced, golden-hued and almost dangerously drinkable, this was the beer that made their name. And perfect it, they did. Fortunately, going the extra mile in pursuit of brewing excellence is one family tradition Jamie is more than happy to keep up. Which brings us to this contemporary take on an eighteenth-century classic: crisp, sessionable and insatiably refreshing.

Samuel Allsopp was one of the first to brew this now world-famous beer. In fact, legend has it, that he brewed his very first batch in a teapot. Whatever the truth, from those humble beginnings Allsopp’s and India Pale Ale became synonymous, travelling all over the globe. Allsopp’s invites you to savour a faithful recreation of the original Burton IPA – the complex, beguiling inspiration for one of the most popular and enduring beer styles, the calling card of the craft beer revolution.