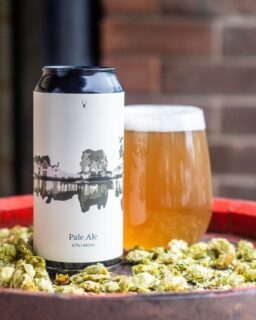 2 Michelin Star Moor Hall restaurant with rooms has partnered with local, independent brewery Neptune to brew their own pale ale, proving that beer has its place in fine dining.

Collaborating to brew their own Moor Hall Pale Ale the beer is described as being soft and juicy on the palate, with vibrant flavours of blueberry and mango, and a refreshing citrus hit. Brewed to be enjoyed with food or simply on its own.

Based just five miles from each other in the Maghull/Ormskirk area in the North West, both businesses have received awards in recognition of their commitment to quality. Neptune has been named Merseyside Brewery of the Year 2020 by ratebeer.com, and fittingly, Moor Hall was recently awarded a Michelin Green Star in recognition of their efforts in adopting a sustainable ethos, with sourcing locality at the heart.

This was by no means a collaboration in name only. Head Chef Mark Birchall and Beverage Director Ben Robinson worked closely with Neptune Brewery on recipe development and Ben even donned his waterproofs and rose with the lark to join the brew team on the beer’s debut brew day.

Neptune co-owner Julie O’Grady speaks of the enduring underdog position of beer jostling to be taken seriously on restaurant menus:

“For too long, beer has played second fiddle in terms of how it is perceived in restaurants, with much focus on the provenance of the ingredients on the plate, but not the liquid in the glass. Beer is a delicious and diverse product, that pairs beautifully with so many dishes, and can rival any wine in terms of its quality.

“It’s so great to partner with Moor Hall, who have always championed beer’s status on their menus, and we’re delighted to work with a fabulous local establishment who are as committed as we are to giving customers both a quality product and memorable experience.”

Moor Hall Pale Ale is available on draught in the venue’s neighbourhood restaurant The Barn and in the fridges at Moor Hall’s main restaurant. Guests have already been enjoying the addition to the menu with lots of positive feedback. Chef Patron of Moor Hall Mark Birhall speaks of the partnership:

“We are extremely proud of our Moor Hall Pale Ale in collaboration with the fantastic Neptune Brewery, who are only 5 miles up the road from us. Provenance is key at Moor Hall and working with local suppliers is a huge part of what we offer here. We worked with Neptune to create a recipe we knew our guests would enjoy – it’s a great beer!”

More photos of the beer and the brew day can be found here: https://drive.google.com/drive/folders/1FuSAiSCPipI2rIQkrIvfYDEOgAgSz5sb?usp=sharing

Neptune Brewery has been brewing modern beers, inspired by tradition, in North Liverpool since 2015 and are proudly independent.

Their beers are naturally conditioned and all the “uns” – that’s unfiltered, unpasteurised and unfined – ensuring the greatest flavour in each brew. It also means their beers are vegan friendly as they want as many people as possible to enjoy them.

They brew a core range of popular and accessible beers accompanied by an eclectic and ever-changing rotation of seasonals, rarities and collaborations – available in cask, keg and cans.