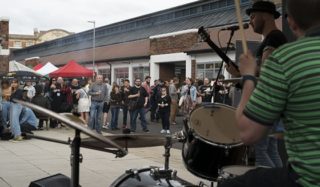 Photo from 2018 festival by Georgianna Scurfield

Nottingham Craft Beer Festival returns to the city on Friday 14 and Saturday 15 June, bringing 25 of the country’s most exciting new breweries and over 200 beers, including many rare and limited edition brews.

The festival marks the finale of Nottingham Craft Beer Week 2019 and takes place at the redeveloped Sneinton Market Avenues. This is the second year the festival has taken place and 2000+ people are expected to attend over three sessions.

“After the success of last year, we’re proud to bring this event back to the Creative Quarter,” said co-organiser Adam Bloomfield. “We learned a lot of lessons from last year’s event and the line-up of breweries we have this year offers some of the most interesting and hard-to-find beers in the UK right now.”

The festival is also the lead event for this year’s Beer Day Britain celebrations, which take place across the UK on Saturday 15 June. Award-winning Brighton-based sommelier Jane Peyton founded the day in 2015 and will be joining us to lead her annual ‘Cheers To Beer’ on stage at 7pm on Saturday 15 June.

“Why would I be in Notting Hill when I can be in Nottingham for Craft Beer Week?” said Jane Peyton. “Nottingham is a renowned beer city that flies a flag for great pubs and social life. I know its citizens will be raising the roof as well as their glass during the national Cheers To Beer and showing the rest of the country how it’s done.”

As well as great beer, the festival will also feature:

The festival is split into three sessions:

Tickets are available from Gigantic tickets for £10 per session, or £15 for an all-day Saturday pass. The event is cashless and token-less and attendees will pay for beer and food at each stall using contactless and chip and pin. Entry includes a souvenir glass and programme.

The full list of breweries at the festival is:

Boutilliers (Faversham)
Established in 2016, with an ethos on fresh and one-off beers that are rarely brewed twice.
boutilliers.com

Brew By Numbers (London)
One of the best and most recognisable faces of the London craft beer scene.
brewbynumbers.com

Castle Rock (Nottingham)
Nottingham’s best-known brewery will be bringing some of their rotating craft brews.
castlerockbrewery.co.uk

Hawkshead (Lake District)
These established real ale producers,  have a section of their brewery dedicated to craft beer.
hawksheadbrewery.co.uk

Lost Industry Brewing (Sheffield)
Inspired by a love of the established California and the rising UK beer scene.
lostindustrybrewing.com

Magic Rock (Huddersfield)
One of the most recognisable breweries in the UK craft beer scene.
magicrockbrewing.com

North Brewing Co (Leeds)
Winners of a slew of awards for their juicy hoppy beers.
northbrewing.com

Northern Monk (Leeds)
Their traditional monastic brewing techniques have put them at the forefront of the UK scene.
northernmonk.com

Ridgeside (Leeds)
Founded in 2010, and producing of the most experimental beers on the market.
ridgesidebrewery.co.uk