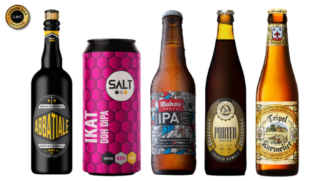 The 2021 results of the fourth annual London Beer Competition are out. Abbatiale Genièvre de Houlle from France wins the beer of the year award with the top score of 96 points.

Other top scores were taken by Ikat, a double IPA made by the Salt Beer Factory, United Kingdom and Great Skanderborg – Castrum from Denmark both scoring 94 points.

Beers were judged on the basis of three primary criteria – quality, value, and packaging – and then scored on a 100-point scale. Beers that scored 90+ points were awarded Gold medals, while beers that scored 76 to 89 points were awarded Silver medals. The primary reason for using three criteria rather than just one is to focus on the overall drinkability of each beer. As a result, the judging panel ranks beers not just by how they taste, but also their overall presentation and appearance in the bottle. In addition, judges assess beer on their relative value in relation to their peers, as determined by retail pricing.

The London Beer Competition is organized by Beverage Trade Network, which organizes alcohol beverage industry events all over the world. The goal of this event was to judge Beer the way consumers judge them.

At the judging session, judges tasted and scored Beer on a blind basis before seeing bottles and marking them for on-shelf appeal as well as value for money. This enabled them to come up with an overall score that reflects their overall drinkability.

London beer lovers can now find these beers in the UK and other parts of the world and buy them with confidence as they offer a great mix of quality, value and attractive packaging.

The London Beer Competition was assessed and judged by a leading panel of top-level beer buyers with current direct commercial buying responsibility, beer consultants and experts who are also directly involved in the development of new beer brands or buying beer for commercial resale.

These are top winners of the competition:

Beer Of The Year: Abbatiale Genièvre de Houlle from France.

Organizer Tasting note: The aroma is bright fruitiness and spiciness with predominant flavors of  nectarine, white pepper, and rustic hay.

Brewery Of The Year: Salt Beer Factory from United Kingdom

Tasting note: Complex aromas of coffee, chocolate and spices. The beer is rich and bold with flavors of sour berries, milk chocolate and potting soil.

These are the Country category winners:

Full results of London Beer Competition are available at: https://londonbeercompetition.com/en/competition-global-results/2021/

About the London Beer Competition:

The London Beer Competition looks to recognize, reward and help promote beer brands that have successfully been created to identify with and target a specific beer drinker. The competition believes that for any beer brand to earn its place on a retailer’s shelf or a restaurant’s beer list –  and then vitally stay there – they need to be marketable and consumer-driven and not just produced in the general hope it can find enough people willing to sell and buy it.

That is why the London Beer Competition is distinctive. It will single out and shine the spotlight on those beer brands that consumers really want to buy and have a clear market value for trade buyers.