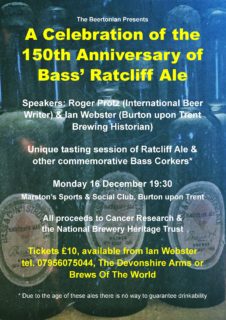 A unique event is happening on 16 December 2019 at Marston’s Sports & Social Club; a chance for you to try Bass’ Ratcliff Ale exactly 150 years to the day from when it was brewed on 16 December 1869. A number of the other Bass commemorative ales, affectionately known as “Bass Corkers”, will also be opened.

Burton upon Trent Brewing Historian and local author Ian Webster will speak about aspects of the history of Bass Brewery before the tasting session commences led by none other than the International Beer Writer Roger Protz.

Ian says: “To have the support of Roger Protz; author, blogger and a man renowned for his expert beer knowledge shows just how important an event this is. I am also hoping to get some other knowledgeable people to give opinions on the ales too.”

“Ratcliff Ale is recognised as one the oldest beer in Britain and was the first of the Bass Corkers, I have been lucky enough to be given a few bottles of it to open and share, there are also stocks of the 1902 King’s Ale, 1977 Jubilee Ale, 1978 Princess Ale and the 1982 Prince’s Ale all ready and waiting to be uncorked.”

“If anyone has a bottle they’d like to donate, it would make the event complete,” says Ian hopefully. “To be able to open and sample all six Bass Corkers on the same night would be a dream come true and in itself would be a historic event.”

“There is of course no guarantee that these beers will be drinkable, even the youngest one is 37 years old, but I have opened a few old bottles before and the results have always been interesting.”

Come and drink in the history on Monday 16 December 2019, 19:30 at Marston’s Sports & Social Club on Shobnall Road, Burton upon Trent.

Tickets are £10 and can be purchased either from Ian Webster tel. 0795 6075044, The Devonshire Arms or Brews Of The World which both on Station Street in Burton upon Trent.