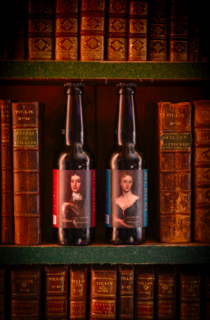 Traquair House Brewery, pioneers of micro brewing, and still brewing in the 300 year old brew house at Traquair are releasing a new series of Vintage Ales based on some of the many extraordinary historical figures associated with  Traquair over the past 900 years.

Brewing at Traquair ceased in the 1800’s but the brew house was rediscovered in 1965 and brewing was restarted by the 20th Laird of Traquair, Peter Maxwell Stuart.

Over the past 50 years, Traquair’s traditional Scottish Ales, rich and dark, have won numerous awards and are exported all over the world as well as the brewery being voted as 20th best brewery in the world by the web site ratebeer.com some years ago.

This new limited edition will mark the first in a series of vintage ales to be released over the coming years based on recipes going back to some of the original ales brewed at Traquair. Each year the recipe will be slightly different but all will continue to be fermented in oak and matured well before bottling.

The ales come with a shelf life of 10 years which will make these Vintage Ales perfect for gifting and collecting. Store them for a special occasion or mark a celebration with them, these beers will be very special whenever you try them.

The design of the labels will reflect a different character who has a close connection with Traquair or a past inhabitant. This year two characters have been chosen; Lord William and Lady Winifred Nithsdale.

Lady Nithsdale was famous for rescuing her husband from the Tower of London after he was captured in the Jacobite Uprising of 1715.

Planning an extraordinary escape she and her servant entered his cell the night before he was due to be executed and Lord Nithsdale slipped out disguised in her servant’s cloak. With the guards confused she managed to return a few hours later and rescued her as well. The three then escaped to France where they lived out their lives at the exiled Stuart court.

This delicious dark ruby ale with an ABV of 8.5% resembles the first ales brewed by the Laird in the 1960’s. Tasting notes are of dark fruits, liquorice, caramel and vanilla with a lingering warm and alcoholic aftertaste. Pairs well with beef, venison and strong cheese. A perfect winter warmer or Christmas treat!