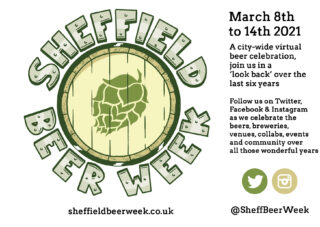 To keep the spirit of this much-loved annual city-wide beer celebration going through an exhaustive twelve months of the global Covid-19 pandemic, Sheffield Beer Week goes virtual in March 2021. Taking the week to celebrate the local beer scene, who have had little respite or adequate support from the government during this global pandemic. Sheffield Beer Week will celebrate via social media campaigns across their channels on Instagram, Twitter and Facebook in a ‘look back’ over the last six years. Asking participants to also share their favourite memories using the hashtag #SheffBeerWeek

Sheffield Beer Week at its core shines the spotlight on the unison of beer and food, community and heritage; with a continued celebration of women working in the beer industry (International Women’s Day falls in the week). In previous years there has been everything from women in beer networking events to brewsters’ tap takeover collaborations with organisers such as Fem.Ale and Ladies That Beer. Last year, in 2020, when Sheffield Beer Week was the last UK nationwide beer week event to occur, Sheffield based LGBTQ+ beer group Out and About, Lost Industry Brewing and Sheffield Beer Week collaborated on a beer to celebrate the pioneering life and work of Edward Carpenter. The collaboration shared a unified sentiment which championed welcoming everyone from across the spectrum of sexuality and gender identity-based cultures. Edward Carpenter (1844-1929) was a significant cultural and political activist around Sheffield in his life. Advocating the simplification of life through his market garden and grow your own approach to campaigning for many issues of social concern. These ranged from women’s suffrage to the protection of the environment, from sexual emancipation to the formation of trade unions. Join Sheffield Beer Week on their Instagram live launch – Monday 8th March, 6pm, with guests from the local beer scene such as breweries Neepsend Brew Co and Saint Mars of the Desert. Shared across socials have been resources compiled by the Sheffield CAMRA branch which highlight pubs, bars, breweries and beer shops where people can source Sheffield brewed beer from; hoping to increase support and boost the local economy.

To kick-off the week, Sheffield’s craft beer festival, Indie Beer Feast usually goes ahead at the iconic Abbeydale Picture House with brewery bars (20+) and street food. On Saturday 6th March the festival will host a virtual launch on their Instagram feed with a surprise beer bundle supplied by associated Sheffield beer shop Hop Hideout. Due to demand, boxes have sold out two weeks ahead of the event.

To see a flavour of previous Sheffield Beer Weeks you can view via the website’s Events Database and the 2019 printed guide online. It features contributions from British Guild of Beer Writers’ members Emma Inch (2019 Beer Writer of the Year), Jane Peyton and beer historian Ron Pattinson: https://issuu.com/exposed_magazine/docs/sheffbeerweek_0219