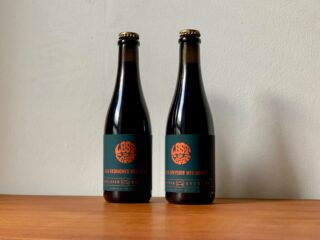 The Leith based Brewery has decided to pay a tribute to its Scottish roots with the launch of two iterations of the classic Scotch Ale, Old Fashioned Wee Heavy inspired by the famous whisky cocktail and Salted Speyside Wee Heavy which aims to recreate the taste of salted caramel flavour.

This 8% ABV Barrel Aged Wee Heavy has been created as a tribute to the Old Fashioned Cocktail and has matured in Speyside Whisky Barres for four months. To refine our expression of the famous cocktail, we aged the beer on orange peel and cocktail bitters. The result is a sweet and rich caramel base, an orange twist and a subtle, supporting smokiness.

The second 8% ABV Barrel Aged Wee Heavy has also been matured in Speyside Whisky barrels but for five months. We have added a touch of West Coast Scottish sea salt, from our friends at Blackthorn Salt, and bottle conditioned with muscovado sugar to pay tribute to the classic salted caramel flavour. Expect dried fruit esters, caramel and toffee malt and a slight salinity.

Working with Scottish Sea Salt from Blackthorn on this project was really important for Campervan Brewery as they’re both sharing the same passion for local produces and sustainability. Rooted in nature and organically approved, Blackthorn distinctive taste echoes the Scottish sea, but with an underlying mineral-rich mellowness.

“We’re very happy to have been able to work with Blackthorn Salt, one of the only Salt companies in Scotland and with such a great ethos.”

“After releasing several beers aged in Bourbon and wine barrels, we wanted to explore a style closer to home. Speyside is the heart of Scottish whisky so it is a great place to source barrels. The Wee Heavy is a traditional style and we’ve given each beer a slight twist to elevate the flavours.”

Our two Barrel Aged Wee Heavy will be launched on the 15th of April and can be found on the Campervan Brewery Web Store https://www.campervanbrewery.com/shop or in a selection of bottle shops.