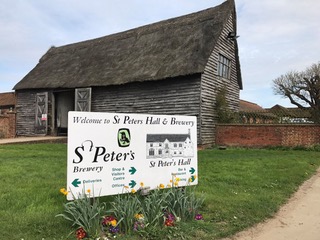 Suffolk brewery, St. Peter’s, is celebrating a successful 2021 with a raft of awards in some of the world’s top beer competitions.

St. Peter’s picked up a gold award for its Golden Ale in the Global Beer Masters, along with three silvers and seven bronze medals for a range of its brews including its gluten free and Without® ranges.

The brewery also picked up two golds, for Plum Porter and Golden Ale and a bronze for Cream Stout in the Asia Beer Challenge which is the biggest, most prestigious beer awards in Asia with more than 100 breweries each with multiple entries participated from as far afield as the USA, China, Australia, Finland, South Africa, Canada, India and Japan.

Three double golds and a silver were also achieved in ‘Europe’s most important beer competition,’ the European Beer Challenge.

“This has been an incredibly successful, award-winning year for St. Peter’s. We’ve been working hard on perfecting all our beers and making sure the liquid is the best it can be; these multiple medals prove that the team is pushing the boundaries on beer quality and production,” explains CEO, Derek Jones who is thrilled with the news.