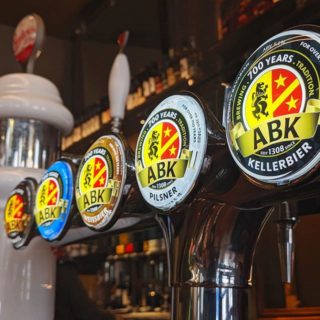 ABK Beers, the multi-awarding-winning Bavarian beer range, has secured national listing in Head of Steam, which has recently won Best New Bar at The Publican Awards for their Leeds – Park Row site.

ABK Beers, owned by ROKiT Drinks, has had immense success of late, now working with 40 partner wholesalers and is listed in over 1,400 independent accounts. Last year, ROKiT Drinks was named lead sponsor of Formula 1 Williams Racing team replacing Bacardi’s Martini. This ROKiT Williams Racing deal is a multi-year agreement that will see ABK Beer and Bogart’s Spirits branding on the racing cars and team gear and merchandise.

Mark Jones, CEO of ROKiT Drinks, said: “We are delighted to be listed nationally in Head of Steam. They are fantastic bars and really do live up to their strapline – purveyors of great beer! The care and attention each site gives to looking after their beer range is second to none, a perfect match for our premium world-class beers.

“ROKiT Drinks is a young and ambitious company making waves at the leading edge of our industry. We have seen record success with our drinks brands last year, with ABK beers winning gold at the International Beer Challenge and the European Beer Challenge alike. 2020 is shaping up to be ROKiT Drinks’ best year yet. Our sponsorship of Formula 1 allows us to reach more potential beer drinkers, that we have not yet reached. Onwards and upwards.”

David Scott, Head of Managed Estate, Camerons Brewery, said: “We have had ABK Weissbeer and Hells pouring as guest beers in a number of our sites over recent months, with great feedback from teams and customers alike, and so we are delighted to announce that a pouring ABK line will become a permanent feature in all Head of Steam’s by the end of March.

“We have a great relationship with the team at ABK, and are looking forward to working closely with them as both brands continue to grow”