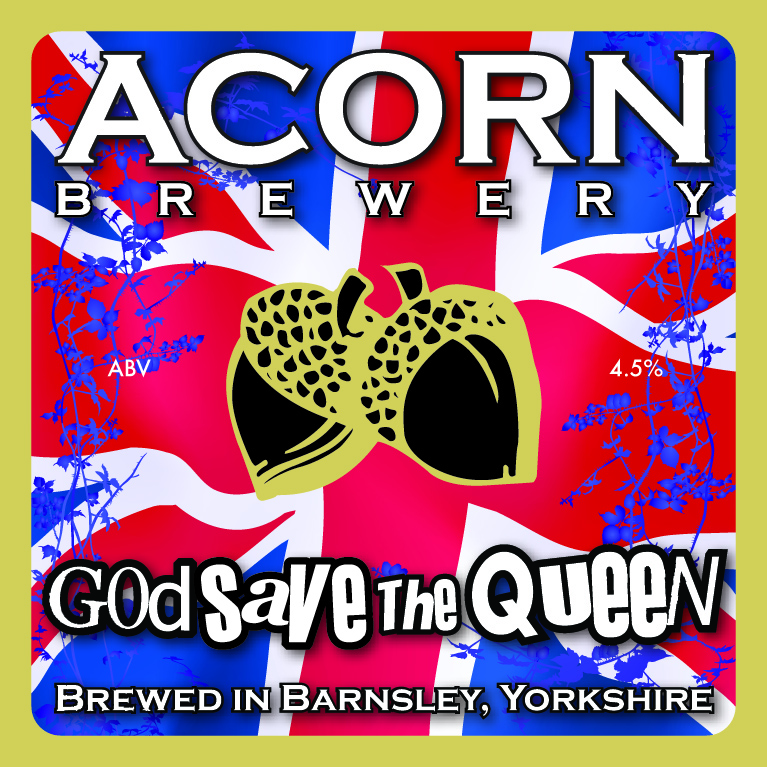 A golden coloured cask ale, it is brewed with crystal and rye malts to impart a rich creamy malt flavour together with English hops Admiral and Whitbread Golding Variety hops for the bittering and the ‘noble’ Sovereign added – ‘to create a distinctive citrus, earthy aroma along with a peppery, spicy bitter finish on the palate’.

The brew is rolled out this month (April) and is available right though to the Jubilee Bank Holiday on 2-5 June.  A striking pump clip gives a nod to the infamous Sex Pistols number one hit of Queen Elizabeth’s 1977 silver jubilee – but Acorn’s proprietor and head brewer Dave Hughes says it is not intended to be irreverent at all.
He said: “The Pistol’s song caused a big stir at the time, and our memory is long enough to remember it. But this is simply a fun brew to mark this terrific occasion. We want it to appeal to all cask ale enthusiasts across the board. It will be available after Easter in the lead up to the celebrations and we hope it will help to make the day very memorable for our own loyal cask-ale appreciating subjects.”
Delivering direct to some 400 trade customers in the North, Midlands and London, the Barnsley based brewer also supplies major pub companies and has national distribution through leading wholesalers. Ends/Ref: Acorn PR 96- Jubilee Ale
*Notes to editors: Acorn’s permanent portfolio includes the award winning Barnsley Bitter, Old Moor Porter, Barnsley Gold and Gorlovka Imperial Stout. Since brewing began in July 2003 Acorn has more than doubled in size to a 150 barrel a week production capacity trade bodies.  Acorn has won more than fifty consumer and trade accolades while SIBA (Society of Independent Brewers) has twice praised the brewer in its annual business awards. Production of Barnsley Bitter began on 4th July, using the same yeast strain as the original Barnsley Brewery of the 1850’s. This is now integral to the distinctive Yorkshire character of all Acorn brands which now include Barnsley Gold, Old Moor Porter, Sovereign, Acorn Blonde, Yorkshire Pride and Gorlovka Imperial Stout which took a top accolade at the Camra National Winter Ales Festival in January 2012.