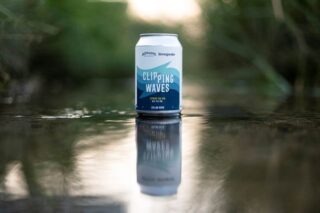 Sharing in the belief that businesses – and beer – can be a force for good, Adnams has come together with Scotland’s Brewgooder, to craft a beer whose sales will support clean water projects in India.

Clipping Waves, a Citrus Tea I.P.A. will be available in pubs on cask from 9th August and in 330ml cans from 24th August in Adnams stores and at Adnams.co.uk. It is the third beer in Adnams 2021 collaboration series which focuses on the Southwold brewery’s journey towards a sustainable future.

Inspired by the cause, the brew features teapigs’ Darjeeling and chai tea as each can of Clipping Waves sold will contribute towards Brewgooder’s two local partners in India, the Jal Bhagirathi Foundation and Gram Vikas. Both are focused on improving sanitation and water access through rainwater harvesting projects and piped water systems.

The floral spice and cleansing tannins of the teas blend with the herb and coconut notes of aromatic hop Sabro, whilst the use of Olicana®, a new English variety of hop, adds flavours of mango and grapefruit to create a refreshing and fragrant IPA. Adnams Head Brewer, Dan Gooderham was excited at the prospect of bringing all these flavours together:

“The late addition of Darjeeling in the kettle gives a good background of tannin to the beer and there will be a lovely hint of spice from the chai tea and cardamon.  We chose Olicana® as it pairs so well with the tea and spice, whilst Sabro adds an interesting tropical edge. A finishing touch of citrus cuts through the tannin to deliver a refreshing tea-spiced IPA.”

Clipping Waves will also highlight Adnams’ continued work to lower its water consumption and reduce its demand on natural resources. Water is a vital resource for a brewery; however, Suffolk is one of the driest parts of the UK, making Adnams sustainably conscious of its water use.

Over the years Adnams has worked to lower its consumption impact and designs in mitigation from the start, from the closed loop recovery system in its brewhouse and distillery, to the harvesting of rainwater at its innovative distribution centre.

Fergus Fitzgerald, Production Director at Adnams elaborates: “Our water requirements change with every tweak to our processes or adjustment in our product mix, so we have to continuously look for ways to reduce our impact. One of our biggest users of water in recent years has been the cooling in the distillery. Our projects have been making progress, and we are seeing a step change in the results that will equate to a saving of around 2 million litres this year.”

James Hughes, co-founder and Chief Brand Officer at Brewgooder said: “It’s great that we’ve come together to make a beer that balances the water impact of beer production with providing clean water for developing communities.”

The name Clipping Waves is inspired by the efficient and sustainable motion of when boats clip waves, as opposed to ploughing through them, thereby reducing their impact on the water whilst maintaining forward momentum.

Clipping Waves is a Citrus Tea IPA made with Darjeeling tea and chai tea from teapigs, and cardamom.

Clipping Waves will also be available for a limited period on cask in Adnams pubs.

The Adnams 2021 collaboration series focusses on Adnams’ journey towards a sustainable future. Each beer, made with a brewery that shares Adnams’ ethos and attitude, is supported by a new commitment towards the Adnams Sustainability Story. Nevermore, an India Porter brewed in collaboration with Thornbridge Brewery, championed British hops and locally grown grains. Cornwall’s Harbour Brewing Co. collaborated with Adnams for Break Point, a Farmhouse Pale Ale, which marked Adnams’ commitment to reducing its plastic consumption for packaging. Clipping Waves, a Citrus Tea IPA, is the third beer in the series in a partnership with Brewgooder.

Founded by George and Ernest Adnams in 1872, Adnams began as a Southwold brewery on the Suffolk coast and has been fiercely independent for the last 150 years. In 2010, Adnams became the first brewery in England to build a distillery on the same site. Its pioneering spirit has enabled Adnams to become a distinctive brewer, distiller, wine merchant, retailer, publican, and hotelier. From its Southwold home, Adnams crafts award-winning premium beers and spirits which are available from its retail stores, managed properties, partner pubs, and in outlets nationwide and overseas. Adnams has long taken pride in its heritage and strong values and is committed to running its business sustainably, leaving its footprints in the sand, not on the planet.

Scotland’s Brewgooder, was founded on a belief that beer can be a force for good and create waves of positivity in the world. Since 2016, every single one of its beers has been Brewed on Purpose, to empower the lives of others, and unlock over 100m litres of clean water for communities around the world. For every can or pint of its beer enjoyed, Brewgooder is committed to ensuring that 100 times that amount will be provided in clean water on projects undertaken by its trusted impact partner, Charity Water, who is currently supporting two local partners in India in their efforts to improve sanitation and water access. The Jal Bhagirathi Foundation is working on rainwater harvesting projects at a household-level, in the Thar Desert of Rajasthan and Gram Vikas works in Odisha state and specialises in piped water systems that bring water directly into every home and school in a community.

In July 2021 Brewgooder was named “Best for the World™ 2021 for their community efforts by B Corp, the world’s leading certifier of ethical and sustainable businesses, and was the only UK beer brand to achieve this recognition.