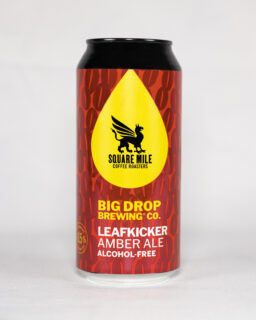 Alcohol-free brewer, Big Drop, has teamed up with Square Mile Coffee Roasters to produce a new coffee flavoured beer that combines the aromas and colours of Autumn. Thought to be the first of a kind in the alcohol-free category, ‘Leafkicker’ is a coffee-infused amber ale that comes in at only 0.5% ABV.

As part of its mission to create great tasting alcohol-free alternatives to any popular style of craft beer, Big Drop chose Square Mile to collaborate with because of its shared values and passion for delivering a product of exceptional quality.

For Leafkicker, the brewing team used Square Mile’s Red Brick Seasonal Espresso blend which is known for offering a sweet, slightly fruity, textured and versatile cup. It was added during the hot side of production, whilst transferring the liquid from the kettle and through the heat exchange to the fermentation tank. This option was chosen to ensure there was minimal risk of over-extraction from the coffee. As with all Big Drop beers, Leafkicker is naturally brewed-to-strength which allows it to be fully fermented while staying below the 0.5% ABV threshold throughout the whole process. The result is a delicious beer that delivers earthy tones and subtle hints of vanilla alongside mellow Citra hops.

Rob Fink, Founder & CEO of Big Drop, commented: “There’s often more than meets the eye with a collab and this is no exception. For coffee and beer to work well together requires the roaster and brewer to be in sync with all the flavour profiles involved. Thankfully all of that togetherness is revealed when it meets your mouth. Leafkicker brings out best of both worlds and is a perfect pairing for this time of year.”

Felicity Tahtis, Managing Director of Square Mile, added: “We were blown away by the parallel values and processes between Big Drop and Square Mile. As a result, the collaboration came together with ease, and the whole journey from the initial conversations to profiling and tastings were rewarding and inspiring. But, of course, the big win is the final product; we’re all delighted with Leafkicker and can’t wait to share it with the world.”

Video available Tom Flawith (Head of Coffee at Square Mile) and Johnny Clayton (Big Drop’s Head of Production) is joined in conversation with Melissa Cole (beer expert & author) to spill the beans on the magic that lies behind this new brew.

About Square Mile: Founded in 2008, Square Mile Coffee Roasters is a multi-award-winning coffee roasting company. Built on a vision of putting London on the map for coffee, we roast to ship speciality beans through our wholesale, web and subscription services worldwide. Lead by taste and curiosity, we’re obsessive about detail and on a mission to delight and foster a global coffee culture. https://shop.squaremilecoffee.com/

About Big Drop: Big Drop was launched in 2016 as the world’s first brewer dedicated to alcohol-free beer by City lawyer, Rob Fink and long-time friend James Kindred. Both had recently become fathers and were looking to cut back on the booze but could not find any decent alternatives to their favourite craft beers. It has since won 70 international beer awards, including seven times ‘World’s Best’ at the World Beer Awards and beating full-strength rivals in blind-tastings on a number of occasions. Big Drop contract brews in batches through a network of brewing partners worldwide, meaning it can produce fresh beer – locally and ethically – with a minimal carbon footprint. Recognised as the market leader in the rapidly growing AF craft beer sector, Big Drop can now be found in over 10,000 locations – including throughout Europe, Australia, Canada and the US. In the UK, Big Drop has listings with major pub groups (eg Mitchells & Butlers), restaurant chains (eg Nando’s) and retailers (eg Sainsbury’s, Waitrose, Morrisons and Ocado) as well as on doorsteps with Milk & More. Its range of beers, which are all <0.5% abv, currently consists of: Stout, Lager, Pale Ale, IPA, Brown Ale, Golden Ale, Hazelnut Porter and a Sour as well as special editions and collaborations with other leading brewers. For more information about Big Drop’s beers, tasting notes and availability, visit www.bigdropbrew.com.