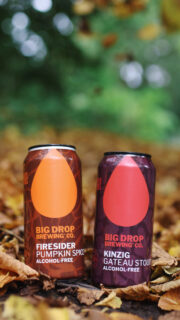 Alcohol-free brewer – Big Drop – is launching its Winter Specials next week (26.10.20) with a pair of decadent additions to entice craft fans and demonstrate the extent to which AF beer has advanced.

‘Firesider’ and ‘Kinzig’ both weigh in at 0.5% abv and are available in 440ml cans but for a limited time only, while stocks last.

Firesider is a pumpkin spiced ale, brewed with a unique blend of toasted malts, pumpkin yeast and seasonal spices – including cinnamon, ginger, nutmeg and cloves. As the name suggests, this beer’s subtle bitterness and flavour will warm you up from the inside. Perfect for relaxing, feet up beside a glowing woodburner, after a long stroll through fallen Autumn leaves.

Meanwhile Kinzig (named after a river in Germany’s Black Forest) is a remarkable stout which pours like black silk with the soft aroma of vanilla. Its seductive chocolatey flavour is perfectly balanced with dark cherry undertones, reminiscent of a Black Forest Gateau. This is a beer to take your time over – and over again – without suffering any downside the following morning.

Nick Worthington, Commercial Director of Big Drop, commented: “We loved developing these two beers because they push the boundaries of AF alchemy and are just perfect for the time of year. There’s now a certain expectation that our specials will be something out of the ordinary and these really deliver on that. The results mean that any dark beer fan will be spoilt for choice this Winter and still be at their best, no matter what life throws at them.”

440ml cans of Kinzig and Firesider are priced at £9.80 for a pack of 4 and £28 for a 12 pack. Buy them from Big Drop’s online shop (https://shop.bigdropbrew.com/) and you can also make a donation to Invisible Chips, the hospitality industry’s hardship fund. Trade enquires are also welcome and should get in touch with Big Drop regarding pricing via cellar@bigdropbrew.com.

About Big Drop Brewing Co: Big Drop was launched in 2016 as the world’s first brewer dedicated to alcohol-free beer by the-then City lawyer, Rob Fink and long-time friend James Kindred. Both had recently become fathers and were looking to cut back on the booze but could not find any decent alternatives to their favourite craft beers. Along with experimental brewer, Johnny Clayton, they perfected techniques to make a range of 0.5% abv beer styles – but crucially without the need for alcohol extraction – resulting in a fuller-flavour. Big Drop has won over 40 major international beer titles including four times being judged ‘World’s Best’ at the World Beer Awards and beating full-strength beers in blind tastings. Big Drop contract brews in batches through a network of brewing partners worldwide, meaning it can produce fresh beer – locally and ethically – with a minimal carbon footprint. Recognised as the market leader in the rapidly growing AF craft beer sector, Big Drop can now be found in over 10,000 locations – including throughout Europe, Australia, Canada and – soon to be – the US. In the UK, Big Drop has listings with major pub groups (eg Mitchells & Butlers), restaurant chains (eg Nando’s) and retailers (eg Sainsbury’s, Waitrose, Morrisons and Ocado) as well as on the High Street with Holland & Barrett and on doorsteps with Milk & More. Its range of beers, which are all <0.5% abv, currently consists of: Stout, Lager, Pale Ale, IPA, Brown Ale, Golden Ale, Hazelnut Porter and a Sour as well as special editions and collaborations with other leading brewers. For more information about Big Drop’s beers, tasting notes and availability, visit https://www.bigdropbrew.com.