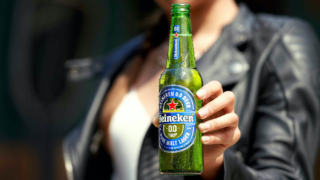 LONDON, Nov 10 — According to a recent survey by market research platform Glow, the most commonly known brands of non-alcoholic beer in the UK are Heineken 00 (with 31 percent of respondents aware of the brand), Kopparberg (30 percent), Becks Blue (29 percent), and Stella Artois 00 (24 percent).

This may be due in part to Heineken 00’s global launch in 2017, a head-starter in brands, previously well known for alcohol, that go on to launch a range of non-alcoholic brews. Comparatively, Stella Artois 00 launched recently in 2020, while many other recognisable beer brands have launched alcohol-free versions of their products in recent months.

“A new interest in no- and low-alcohol beers has been on the rise,” says Neil Gupta, MD EMEA of Glow. “We will continue tracking to see if the trend of opting out of alcohol will continue into 2021, as we move into our new normal.”

While Heineken 00 leads for brand awareness, it is surpassed by competitors in the category of previous consumption. Kopparberg and Becks Blue lead the way in consumption, as they have been consumed by 20 and 19 percent, respectively. This is to be expected, due to the brands’ longevity in the market; Kopparberg has had non-alcoholic offerings since 2007, with Becks Blue acting as a staple since 1993.

Following that, Heineken 00 has been consumed by 15 percent of respondents.

According to The Drum’s August issue, Heineken’s Global Sponsorship Director Hans Erick Tuijt states that Europe has seen a “surge of health and wellbeing trends accelerated by consumer reactions to coronavirus”, leading to a sharp increase in interest for alcohol-free beverage choices. The Drum explains that Heineken’s target market for its 00 brew is known as the ‘Can’t-ers’ and ‘Don’t Want-ers’: those who can’t, or don’t want, to become inebriated, but still enjoy the taste of beer. This includes parents, professionals, and those with an active or health-based lifestyle.

Tapping into the “Can’t-ers” category, which includes those refraining from alcohol during the work day, Heineken enlisted The Office stars Angela Kinsey and Brian Baumgartner for a cheeky  ‘Bring Your Beer to Work Day’ TV advertisement — demonstrating the alcohol-free beer’s potential to be consumed at any time.

With the UK moving into tighter lockdown restrictions once again, Heineken’s faith in the alcohol-free market is not deterred. Tuijt stated to The Drum, “It’s no secret consumers have used lockdown to kick-start or refresh their health habits. And globally, we’ve never been more conscious of our health.”

There is much conversation to be had surrounding the ever-increasing offerings of non-alcoholic beer. While it appears there is a large market for it, as evidenced by many major beverage companies pivoting to include non-alcohol offerings, the trend offers food for thought as to brands’ intentions. Does the inclusion of non-alcoholic beverages aim, in part, to get those below the legal drinking age attached to a brand, ready to move on to the full line of products in due time — or is it just for the love of hangover-free Sundays? UK-based Drinkaware and Australian-based Hello Sunday Morning are among a few organisations championing the decrease in alcohol consumption.

Interesting to note is that as of the last day of Glow’s survey, Guinness had just launched its alcohol-free brew, Guinness 00 — yet 6 percent of respondents stated they have already consumed it. Is this a case of loyal consumers rushing to stores to give it a go, or is it simply that strong brand awareness has spilled over into their memories? Either way, it looks like Guinness 00 has a head start in consumers’ minds.

Glow is a data research and analytics firm founded 7 years ago with the central goal of delivering rapid response insights to enable nimble decision making. Glow has made headway in the democratisation of research via a cloud-based platform which empowers business to understand, measure and extract quick turnaround public insights to support evolving organisational needs and  objectives.

Glow delivers a specialised customer insights ecosystem, with easy-to-use tools and resources to inform a deep understanding of consumer and client sentiment. Its cost-effective, speed to insights capabilities means Glow is rapidly becoming a leading global research platform used by corporations and SMEs.

All media inquiries to:

For inquiries regarding survey creation: