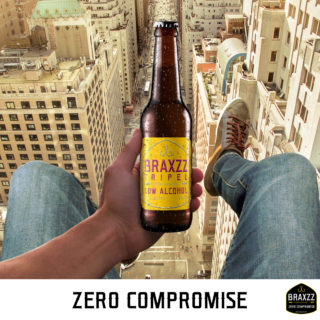 Braxzz has announced that their new world-first 0.2% Tripel is now available in the UK to buy via drydrinker.com

Braxzz has expanded quickly over the last 6 months since its official launch at the Great British Beer Festival in August and now has 6 alcohol-free and low-alcohol products in its range. So far they have created 2 dark beers (a Porter and a Bockbier), 2 IPA’s (an Orange IPA and a Rebel IPA), in addition to a 0.0% Cider and now a 0.2% Tripel. Their Tripel and Porter are both world-first’s in the no/low ABV world. Braxzz also has further plans to continue to increase its range throughout 2019.

James Leary of Braxzz explained: “We keep listening to the consumer and improving the variety in our offer. The perception from consumers of the taste and quality in the alcohol-free market is improving with every month that passes by. With that, people are now keen to try new things. We are raising the bar and bringing new products to the market that haven’t been produced before and the feedback has been excellent.

Since our launch of the Tripel in the Netherlands at the back end of last year, we have seen real intrigue from journalists, customers and consumers. People have been desperate to try it and now I am glad to say that it is also on sale in the UK via drydrinker!”

More information can be found at braxzz.com or by emailing sales@braxzz.com directly.