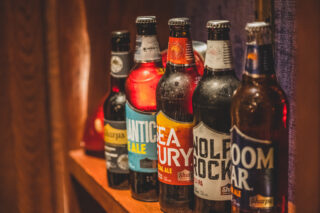 The North Cornish brewery was awarded six medals at the International Beer Challenge 2020, three at the European Beer Star Awards and, most recently, a gold for its flagship amber ale Doom Bar at the Brussels Beer Challenge.

More than a hundred beers from all over the world were judged across the three events, blind tasted by judging panels of publicans, brewers, retailers, and flavour analysts.

The European Beer Star awards saw Sharp’s collect two more gold medals, alongside the one for Doom Bar in Brussels, for Atlantic Pale Ale and Coconut Stout and a Bronze for speciality bitter Sea Fury.

The 10 medals follow a number of other accolades achieved by Sharp’s in 2020 which include Sea Fury being named the UK’s best pale bitter and Wolf Rock taking home a bronze award in the World’s Best Dark Beer category at the annual World Beer Awards.

James Nicholls, Marketing Controller at Sharp’s Brewery, said: “At all three of these events, you’re being judged by some of the world’s most accomplished beer experts, making them a pretty accurate barometer of who is producing the best beer around the world. Having such a large contingent from our range awarded medals is a testament to the passion, innovation and skill shown by our immensely talented brewers.

“There are some phenomenal breweries competing in these awards so to be considered among the best is a real achievement. We are so proud that our beers are consistently recognised on the international stage for their quality and flavour and this year’s awards haul is an exceptional feat for the team.”

Sharp’s Brewery has a tally of around 150 international brewing awards, achieving thirteen in 2020 alone.

All of Sharp’s Brewery’s award-winning beers can be purchased from the brewery’s online shop and delivered anywhere in the mainland UK. To shop online, visit: https://www.sharpsbrewery.co.uk/sharps/shop

Sharp’s Brewery is a modern brewer, based in Rock, Cornwall, which has grown rapidly since its foundation in 1994, doubling staff number in the last 9 years from 70 to over 140. The largest brewer of cask beer in the South West, Sharp’s flagship beer, Doom Bar, is probably the most successful cask beer of its generation and is currently the UK’s no.1 cask beer brand.

Sharp’s Brewery is a proud supporter of grassroots rugby in Cornwall and sponsors a number of local clubs. In 2019, Sharp’s turned the tables on the music industry through ‘Keynvor’, a partnership with Mercury Music Prize nominee Nick Mulvey to produce the first playable vinyl made from recycled ocean plastic found on the Cornish coast. Proceeds from sales of the exclusive ‘Ocean Vinyl’ including digital streams continue to go to Surfers Against Sewage to help protect British coastlines from pollution, including plastic waste.

Issued on behalf of Sharp’s Brewery by Citypress.