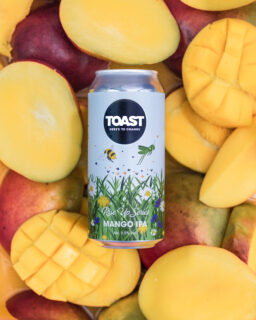 Craft brewery Toast Ale has released a new beer for Earth Day, a global movement to transform our planet. The freshly brewed Mango IPA hopes to raise awareness of the environmental impact of our food system and inspire positive action to restore nature.

A collaboration with UK veg box company Oddbox and fruit juice brand Flawsome, the beer’s focus is on how we can reverse biodiversity loss by fixing the food system – starting with food waste. Food production is the biggest contributor to climate change and biodiversity loss[1] but one-third of all food is wasted.

Mango IPA is a limited-edition brewed with surplus fresh bread (as is Toast’s signature style) and surplus mangoes that would otherwise have been wasted. This prevents food waste and reduces the environmental footprint of the beer.

Why is there surplus fruit? Sometimes there is more available than the retailers order (trees take years to grow and produce fruit so it’s not possible to grow to order). Sometimes the fruit is too small, too big, the wrong shape or colour.

For this beer, Oddbox sourced the ‘too many’ and Flawsome sourced and pulped the wonky.

Toast’s beer is the fourth beer of its Rise Up series, which raises awareness about the environmental impact of our food system and celebrates the benefits to us all by supporting better, healthier ways of producing our food.

The beer’s label carries an important message about biodiversity:

“Industrial food production is destroying and polluting habitats, contributing to the mass extinction of species. But one-third of food is wasted. By reducing food waste and restoring nature, we can protect the diverse web of life on which we all depend.”

Beer lovers can do their bit by enjoying a cheeky pint. It’s a 5.5% juicy India Pale Ale with a smooth mouthfeel, lightly spiced to lift the sweetness of the mangos and oats. All profits going to the environmental charity Feedback to support campaigning work leaving the sweetest of after tastes..

People can also write to their MPs (there’s an easy-to-use form at toastale.com/riseup) to ask for food to be on the agenda at the COP26 UN Climate Change conference in November.

Toast’s co-founder & Chief Operating Officer, Louisa Ziane, explained “We’re really happy to be collaborating with our B Corp friends Oddbox and Flawsome to create a delicious beer that prevents mangoes from being wasted. We love to celebrate positive solutions to big problems and ultimately reducing food waste is the simplest, most equitable action we can all be part of.”

Heather Lynch, Oddbox’s Sustainability Manager said, “We’re delighted to be partnering with Toast Ale and Flawsome. Food waste accounts for around 8% of global greenhouse gas emissions. This year’s Earth Day theme is Restore Our Earth™, focusing on innovative thinking that can restore the world’s ecosystems – we believe that ensuring that all food grown is eaten is the simplest place to start. Our Mango IPA proves how delicious that can be.”

Karina Sudenyte, co-founder of Flawsome! said, “Food waste is a huge problem and is one of the reasons we started Flawsome! We have a 5 year mission to save 20 thousand tones of surplus and wonky fruit so by partnering with ToastAle and Oddbox our joint vision will bring us one step closer to making that happen”

It’s time to Rise Up (over a beer that does the world of good).

The beers will be available at toastale.com from 22nd April (from £3.50 per 440ml can) and at independent retailers.

Toast brews planet-saving beer using surplus fresh bread. This prevents food waste, and reduces the demand for malted barley, and thereby the demand for land, water and energy. Toast open sources a recipe for home brewers and collaborates with breweries all over the world to scale its impact. All its profits go to charities fixing the food system. Toast is a social enterprise and the first UK brewery to become a B Corp.

In the lead up to COP26,  Toast is releasing a series of limited edition beers with fellow B Corps Divine Chocolate, teapigs, Hobbs House Bakery, Oddbox, Rebel Kitchen, Rubies in the Rubble and Cafedirect. Each beer will highlight an element of the ecological crisis, and the change needed to the food system to meet the goals set in the Paris Agreement at COP21.

About Oddbox (Oddbox.co.uk)
Oddbox is a community powered weekly rescue mission to save delicious, fresh fruit and veg which is deemed ‘too big’, ‘too ugly’, the ‘wrong’ colour, or ‘not needed’ from going to waste. It delivers its boxes directly from the growers to people’s doorsteps across London and the South East.

With food waste being a major contributor to greenhouse gas emissions, Oddbox is building a community that together can play its part in fighting food waste and tackling climate change. A proud B Corp with over two million boxes delivered since it launched in 2016, Oddbox has already saved 13,790 tonnes of food waste with a goal of saving 35,000 tonnes by 2025.

Through strong relationships with farmers, Flawsome! set up a Fairer to Farmers programme by paying fairly for their products. As a brand they always strive to make a positive impact on the planet through everything they do. Flawsome! was born to be a business as a force for good. As a certified B Corp they invest nearly 2% of their sales – not just profit – in environmental causes and charities around the world.