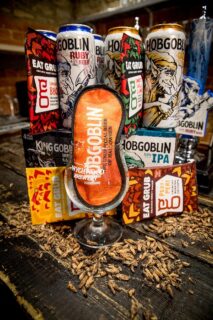 Hobgoblin, Britain’s third fastest selling premium bottled ale, has been celebrating its 15th year as ‘The Unofficial Beer of Halloween’ – by going further.

Stirred on by the worldwide interest in the Hobgoblin Beer Vermouth of Halloween 2016, a global first with its beer ice cubes of frozen ants, the Goblin has been inspired to think deeper, moving into the territory of gastronomy and the future of the planet.

With Hobgoblin’s four-month advertising campaign, ‘Best Sipped in the Dark’, playing across multiple media channels, the ethically-refreshed Goblin is taking the ‘fly posting’ slice of his campaign to new heights by addressing insects as the protein of the edible future.

Comments from the brewery:

“The Hobgoblin Beer & Bug Snack Pack have been flying from the brewery. Some of our drinkers say that eating insects is just not cricket; but most are bowled over by their nutty taste, their crunch, and their potential as a regular and nutritious food for the future.

“Insects are incredibly high in protein and fibre, low in carbohydrate or sugar, and low in carbon footprint, as they use little water or food or energy compared to other meats (so it’s not just the size of their feet). They use little land and are nutritious foods that we think of wrongly as ’waste’. Since 80% of the world’s population eat them, is it just the word ‘insect’ which needs changing?  After all, honey is in reality ‘bee vomit’ and prawns just ‘sea bugs’; so maybe it’s all in the words.”

Hobgoblin IPA has been voted ‘Best English Style IPA’ in the UK by The World Beer Awards 2020.

Consumer spending on Halloween has almost doubled since 2013 to become the second biggest drinking occasion after New Year’s Eve, and the third most popular retail event after Easter and Christmas. 77% of millennials spend specifically on Halloween, and it over indexes with females.  49.5 million pints of Hobgoblin has sold in the UK in last 12 months, and during lockdown the beer has delivered phenomenal growth, proving its status as a trusted national brand.

Hobgoblin is considered by many as the original craft beer (MBC Eureka! Survey 2020).

Press release from R&R Teamwork on behalf of Hogoblin