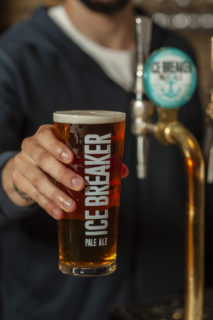 A beer developed and crafted by apprentice brewers at Greene King is set be enjoyed the length and breadth of Britain this summer after the UK’s leading managed pub company and brewer launches it nationally.

Icebreaker, a deliciously refreshing, easy drinking, unfiltered pale ale is the first beer crafted by the brewing apprentices, to graduate into the core Greene King beers portfolio. The first cohort of apprentices, under the tutelage of Master Brewer Ross O’Hara, were given the freedom to break boundaries of brewing within Greene King to develop the beer of their choice.

The result is Icebreaker, a 4.5% unfiltered pale ale which is bursting with fruity hop flavour. Brewed with Citra and Simcoe hops, it emanates waves of guava and passion fruit which crash with big citrus flavours for this bold pale ale.

Speaking about Icebreaker, Master Brewer Ross O’Hara said: “When our apprentices first proposed the idea of developing an unfiltered pale ale we were totally up for it and we have chosen a hop combination which is enhanced when in an unfiltered form. It is bold in flavour as you would expect from a modern craft style pale ale but at 4.5%, it’s also incredibly drinkable, so you can enjoy more than one.”

Matt Starbuck, Managing Director, Greene King Brewing & Brands added, “We decided to bring this beer into the permanent portfolio now as it’s a natural fit alongside our existing fantastic selection of session beers we brew and gives consumers the full range of choice from traditional cask that we are known for, to modern, keg pale ales.”

Icebreaker was extensively tested in blind tasting consumer forums across its competitor set and consistently came out top.  The beer is available from June in keg across free trade and national pub retailers including selected Greene King pubs.