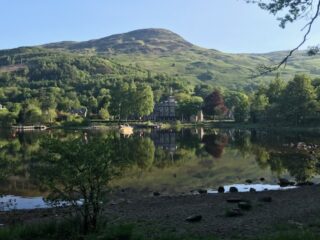 Arran Brewery has put its Loch Earn Brewery Hotel and Visitor Centre on the Market. The site on the banks of Loch Earn features 10 moorings, three piers, fishing, a brewery with the potential to brew 3500L per day, a Cider Shack producing batches of 1000 litres of Cider as well as a hotel with three bars, three restaurant areas, a coffee shop and 39 bedrooms.

Managing Director Gerald Michaluk said “It is with a heavy heart we are having to put the property on the market. We have not recovered from a small fire, following which the insurance company has still not settled our claim in full. This has lead to a lack of funds while the property needs around £600,000 spent on it to bring it up to spec.  Unfortunately we simply don’t have that kind of money, given the current downturn in the brewing industry, to put into the building. As such we have put the site on the market for offers over £775,000 but a new owner would need to have around £1,500,000 to acquire the site and to realise its full potential”.

The brewery acquired the site in 2013 and purchased and installed a secondary brewery in the outbuildings which is currently in need of commissioning. Plans are to build a further three buildings and open both a whisky shop and a local produce shop.

The brewery reports having tried to form a joint venture with several parties on the site but in the end none of these proposals have come to fruition.

The brewery recently acquired Flying Firkin, a wholesale beer distributor in the North of England, and is in the process of acquiring a 16500 sq ft warehouse facility for this company The brewery is clearly broadening its focus to include the South.