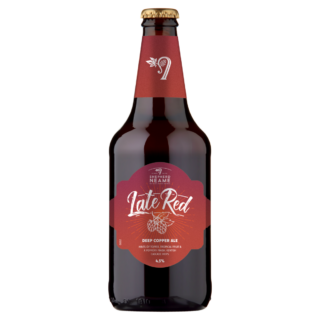 Faversham brewer Shepherd Neame is delighted to announce the return of seasonal favourite Late Red – in cask, and in bottles for the first time since 2017.

Complex and full-flavoured, this seasonal ale forges the perfect balance between rich, dark malt flavours and a citrussy hop finish.

Late Red blends pale ale malt and gently-kilned crystal malt with UK Cascade and Goldings hops. To enhance its taste and aroma, the beer is triple-hopped, with a late copper addition of Goldings and Cascade.

The new 500ml bottles of Late Red will be on sale at the brewery shop in Court Street, Faversham from Thursday (September 9). They are also available to pre-order now from Shepherd Neame’s online shop for delivery from Monday (September 13). Visit snea.me/late-red-bottles.

Britain’s oldest brewer Shepherd Neame has been based in the market town of Faversham, Kent for over 300 years. Perhaps best known for great British classic ales such as Spitfire, which carries the Royal Warrant, its diverse portfolio includes Five Grain Lager, the Bear Island collection including new 0.5% IPA Noughty Bear, and the Whitstable Bay Collection. It also brews international lagers under licence including Samuel Adams Boston Lager, and is the sole UK distributor for premium Thai lager Singha and the Truly hard seltzer range. The independent family business boasts an award-winning visitor centre and more than 300 pubs and hotels throughout London and the South East, from the historic heart of the City to the Kent coastline.