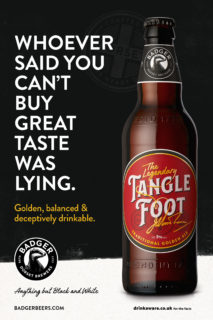 Badger Beer, from Hall & Woodhouse, brewed in Dorset since 1777, is launching its first ever outdoor advertising campaign, which goes live nationally from 22 April. The campaign highlights the great taste and quality of the brand, to encourage trial of the award-winning characterful beers.*

The series of 48-sheet and 6-sheet adverts carry the strapline: ‘Whoever said you can’t buy great taste was lying’, and will feature across key roadside sites in both digital and non-digital format nationally, as part of Badger’s fully integrated media campaign for 2019. The adverts will also feature within Badger’s social media campaign launching at the same time.

The national roadside adverts will feature a Tangle Foot bottle whilst the Dorset adverts will feature a Tangle Foot bottle as well as a cask handle and pump clip. This will remind consumers that as well as being available throughout the off-trade, the beer is also served in Hall & Woodhouse’s network of public houses across the South of England. The Dorset adverts will carry the strapline: ‘Whoever said you can’t buy great taste hasn’t been to Dorset’.

Sarah Pace, Brand Manager at Badger Beer, says: “We are extremely excited to be launching our first ever outdoor campaign, which highlights the great taste and quality of our beers. The campaign will also build on the relaunch of our brand just 10 months ago and continue to grow brand awareness, both nationally and within our Dorset heartland. With this awareness-boosting campaign we aim to increase our rate of trial and ultimately our own base of loyal customers.

“Going live on 20 May, the campaign will also include sites at key railway stations within our heartland, featuring 48-sheet posters by the platforms and carrying the same strapline: ‘Whoever said you can’t buy great taste hasn’t been to Dorset’.” **

The outdoor adverts were designed by integrated agency Thinking Juice. Following the rebrand last May, the redesigned Badger Beer range is now outperforming the premium bottled ale market on a MAT basis, with the Tangle Foot bottle in particular faring extremely well, growing at an impressive 18% in value, year-on-year.***

Badger Beer has been brewed in the heart of the Dorset countryside since 1777 by the family-owned independent brewer Hall & Woodhouse. Hall & Woodhouse is well known for its range of award-winning beers brewed under the Badger brand and its network of public houses throughout the South of England. The brewery is now managed by the seventh generation of the Woodhouse family.