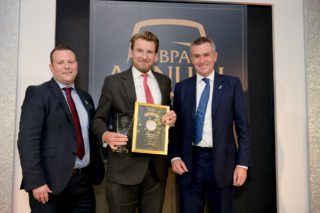 The awards, which have been run by the BBPA for the last eight years, celebrate and showcase the very best achievements and innovations of the beer and pub industry.

The winners triumphed in five categories; Pub Champion (sponsored by Molson Coors), Heart of the Community (sponsored by Diageo), Beer Champion, the Chairman’s award and the Sustainability award (sponsored by C&C Group) – a new category for 2019. Each winner was presented with their award by BBPA Chairman and Chief Executive of Fuller, Smith & Turner, Simon Emeny.

Brakspear received the Pub Champion award for their comprehensive support programme for all their tenants and lessees, which includes advice and help from business development managers, marketing and promotional professionals and an interior design service.

Brakspear’s entry also highlighted initiatives it had made to help its pubs strengthen their positions in their communities, from creating beers at its brewery that are only sold in individual pubs, to even making bespoke pairs of socks for loyal pub customers!

Craft Union Pub Company received the Heart of the Community award in recognition of the 628 individual charity events specific to local communities its pubs put on between August 2018 and July 2019. In total, these community-led events raised over £344,000 for hundreds of local charities.

The Craft Union Pub Company entry also highlighted its “Love Your Local” campaign, which asked customers why they love their particular local. Winning entries were then awarded donations worth £500 for local charities of their choice, bringing a direct benefit to the local community

Carlsberg UK took the Beer Champion award for the rebrew and relaunch of their Carlsberg Danish Pilsner. The goal of the relaunch was to drive a reappraisal among consumers of Carlsberg through a low-budget, but bold and high-impact external marketing campaign. To achieve this successfully, however, Carlsberg UK knew it had to win the support of all 700 of its colleagues for the beer first through a powerful internal campaign.

This internal campaign was managed in-house by the Carlsberg Danish Pilsner project team and the Corporate Affairs team, and successfully reinvigorated colleagues and drove engagement across the business

Adnams received the Sustainability award in recognition of their commitment to putting sustainability and the environment at the heart of their business for several years.

The Adnams award entry highlighted their complete sustainability story, which has seen Adnams reduce their carbon emissions by 48% since 2008 and improve their local biodiversity with over 500,000 rehomed honeybees. Adnams now send zero waste to landfill.

Brigid Simmonds won the Chairman’s Award. Simmonds won the award in recognition of her ten years as Chief Executive of the British Beer & Pub Association, a role she is stepping down from on 11th October 2019. During her tenure, Brigid has led numerous successful campaigns, from reducing beer duty and transforming the reputation of our industry with Government, to encouraging social responsibility and working with members to enhance our reputation as a sector with consumers.

“Many congratulations to all of our winners and thank you to all those who entered as well. The BBPA Annual Awards serve to highlight the continued achievements of brewers and pubs and we are very proud of what they do.

“I am delighted to have won the Chairman’s Award. I have loved working for the BBPA for the last ten years and will always support the brewing and pub sector. As I said on the night, the success of the BBPA over the last ten years has been down to the full engagement and support of the Board, members and great team I have led.