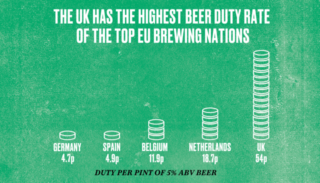 “It is great news that Boris Johnson has committed to reviewing UK alcohol taxation.

“Beer tax is a particular burden for pubs where 7 out of 10 alcoholic drinks sold are beer, a lower strength British made product. In fact, we pay 11 times more beer duty than in Spain and Germany.

“Three pubs a day close their doors for good. A freeze or cut in beer tax at the next budget would help halt this.

“This commitment from Boris Johnson to review alcohol taxation gives him the opportunity to listen to the 216,000 supporters of the Long Live the Local campaign and cut beer tax to support local pubs and the communities they serve.”