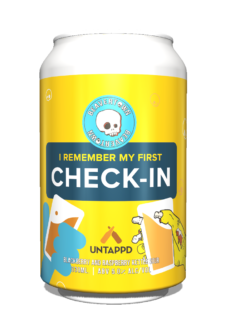 The base recipe has been sent to participating breweries, with the opportunity to put their own twist on it as those taking part are expected to source at least one ingredient directly from a grower or supplier within 100 miles of their brewery.

For their rendition of I Remember My First Check-In, Beavertown have made the addition of local fruit and lactose to create a limited edition 5% kettle sour, packed full of local blackberries and raspberries. Boasting a juicy fruit tang that leads into mouth-watering bramble fruits softened and sweetened with lactose, less than 2000L has been produced – meaning this super fruity, sweet and sour rarity will be gone in a flash. Grab a can while you can!

Logan Plant, Founder and CEO of Beavertown Brewery says: “When I started dreaming of being a brewer, Dogfish Head were one of my biggest influences, and they still are. I’m humbled to say that Sam is a really good friend of mine now and has been a mentor from across the pond. He’s still pushing craft beer as passionately as ever and he’s a massive inspiration for me and how I think about beer and the industry. To be asked to collaborate on the celebration of Untappd’s ten-year anniversary, with the opportunity to support local producers and create a beer that commemorated both was an absolute pleasure. I look forward to the release and I hope everyone enjoys it!”

Beavertown are currently the only English brewery taking part in the Untappd birthday celebration, making up one of just four UK breweries. I Remember My First Check-In was created to celebrate the connectivity of the craft beer community, even in uncertain times. As legendary sour beer brewers, Dogfish Head were chosen to lead on creating the base recipe, crafted to support the entire craft beer ecosystem – from farmers, to brewing artisans to bartenders and finally Untappd users.

Only available while stocks last from the Beavertown online shop.

Beavertown is dedicated to crafting high quality, innovative beers like Gamma Ray APA or Neck Oil SIPA that appeal to the thirsty masses, as well as more experimental brews from our Tempus Project. From brewing to branding, we believe in creativity in everything we do.

For more information, or to receive a sample, please email: