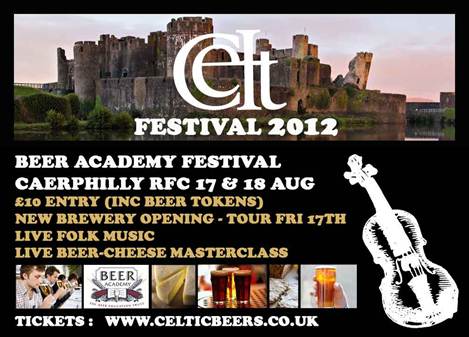 The Beer Academy will hold its first Welsh Beer Festival in Caerphilly in August.  The Celt Beer Academy Festival is being held at Caerphilly RFC on Friday 17th and Saturday 18th August.  This will not only offer the opportunity to sample a wide range of locally produced beers but also to feature live folk music, beer flavour training from a Beer Academy Sommelier and a Beer and Cheese Masterclass. The highlight of the weekend will be the opening of the new Celt Beer Experience brewery

Festival organiser and Beer Academy Sommelier Tom Newman said “The Welsh beer scene is flourishing and there is enormous public interest in discovering more about locally brewed beers.  This Festival will be a chance not only to discover new beer gems but also to find out more about beer.  But the great thing about beer is that it’s not stuffy. You can learn and have fun at the same time.  What better way to get to grips with the subject than to share a  few beers with friends , listen to some great music and sample some delicious local foods?”.