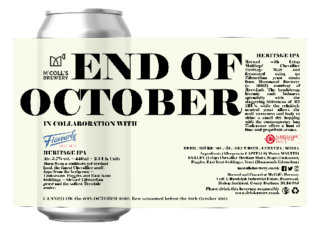 Released at…..the end of October exclusively through our friends at Flavourly (and a tiny limited amount of cans on our webshop: mccollsbrewery.co.uk)

Using the wonderful Crisp Chevallier Heritage Malt this beer celebrates the abundance of complex and nuanced flavours malted barley has to offer.

This is a 100% Chevallier Heritage Malt beer, and we love it, it’s very headstrong in its malt and bready notes while also offering raisin sweetness and sherry notes.

Such a bold malt character is balanced by a staggering 16kg of Fuggles and East Kent Goldings (95 IBUs) and a more delicate dry hop addition of Endeavour.

Based in County Durham, Daniel and Gemma McColl launched McColl’s Brewery in spring 2017. Inspired by traditional British, Belgian and new wave beer styles we look to create beer that everyone can enjoy.