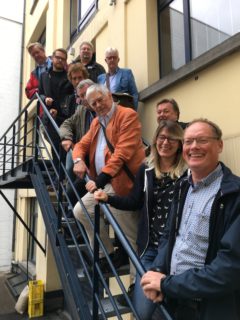 Guild members at the inaugural meeting of the European Chapter

At a time of deepening rift between the UK and Continental Europe, the British Guild of Beer Writers is bucking the trend by launching a new European Chapter to strengthen ties between members on both sides of the Channel and help its members unite behind the Guild’s mission of improving standards of beer writing.

The group held its first meeting in Brussels at the end of September. Provisionally called the European Guild of Beer Writers – a Chapter of the British Guild of Beer Writers, the new group will focus on raising the standard of beer writing across Continental Europe, sharing expertise among members, and creating more social opportunities for European members to get together.

The inaugural meeting was attended by existing Guild members from Belgium, Germany, Italy, Netherlands and Ukraine, as well as the UK.

Guild Chair Pete Brown said, “Beer has always been the most sociable beverage of them all. Beer brings people together, as friends and equals. When there’s so much political rancour around the issue of Europe, it feels like the perfect time for a beer-related organisation to create closer ties between Britain and our friends and colleagues on the continent.”

Dutch Guild member Henri Reuchlin, who originally suggested the idea, said, “A rich diversity in different beer styles has always been the backbone of European beer culture. It is what attracts beer drinkers from all over the world. It is this rich beer culture that we aim to promote.”

The European group will aim to meet twice a year, as well as holding training courses and events that will help its members communicate about beer in English as well as their native languages, and giving English-speaking members greater access to and knowledge of the great brewing traditions around Europe.