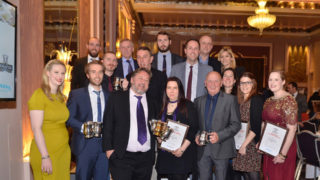 The deadline for this year’s this year’s awards is fast approaching. So if you haven’t yet entered, make sure you do so before the deadline of this Friday, 22 September.

Winners and runners up in this year’s awards will share a prize fund of £11,000. The competition is open to writers, broadcasters, photographers, bloggers and podcasters whose work has furthered the Guild’s mission “to extend public knowledge and appreciation of beer and pubs”.

Full details of all nine categories in the Awards, and advice on how to submit entries, can be found HERE.  Entries must be have been published between 1 September 2016 and 31 August 2017.

The Guild publishes a shortlist for all nine categories in November, while the winner and runner up for each will be unveiled at the Guild of Beer Writers annual awards dinner on 28 November. One overall Beer Writer of the Year will receive the Michael Jackson Gold Tankard Award and the Guild also bestows the Brewer of the Year title on one brewer at the same event.

Judges this year include Keith Miller, food and drink commissioning editor at The Daily Telegraph; Fiona Beckett,  food and drink writer whose work is published in The Guardian among others; Bruce Smith, brewer at Maltsmiths Brewing and David Cunningham, programme director at There’s A Beer for That, the campaign to reignite Britain’s love of beer. Last year’s Beer Writer of the Year, Pete Brown, chairs the panel.

Entries and nominations – from fellow writers, publishers or friends – are invited for nine categories. Each carries a prize of £1,000 for the winner and £500 for the runner-up, with the exception of the Corporate Communications category, where entries are submitted by companies rather than individuals and the winner receives a trophy, and the new Citizen Communicator Award, which carries one £500 prize only in its first year.