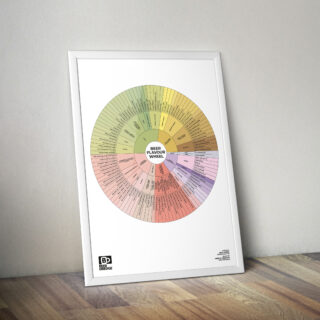 BeerDredge, run by beer expert Mark Dredge, has launched a set of Beer Flavour Wheels with the aim of improving beer communication and education, whether at home, in the bar, or the brewery.

Describing the flavours and characteristics of beer can be a challenge for drinkers and as an experienced beer judge, writer and educator Mark Dredge has created new visual tools to help develop the evaluation and understanding of beer.

The wheels have been produced to work equally well in a brewery’s sensory analysis, as a poster or staff training tool in a taproom, or sitting beside the drinker at home. They combine source-based terms, like fruits and spices, with relevant technical language and chemical compounds, like particular yeast by-products. What makes these wheels different from others is how they give each ingredient their own wheel and own specific lexicon, which combine to create a master Beer Flavour Wheel.

The Beer Flavour Wheels, all designed by Andrew Henderson, are available as a set of six:

Mark Dredge comments: “As a beer lover who’s obsessed with flavour I’m really excited about these Beer Flavour Wheels. They are a brilliant visual tool which can help more drinkers to understand beer and to understand where flavour comes from. As more people want to drink great beer, it helps the whole industry if we’re able to speak and understand the same language about flavour. For the consumer that means buying the beer they’re most likely to enjoy. For the server it means being able to describe the beer well. And for the brewer it means being able to evaluate their beer, and describe it to others. The enjoyment of beer always begins with knowing the flavours we most enjoy, and how to describe them.”

For more information, or for discounts for large and corporate orders, or to enquire about translations and digital download rights, contact: mark@beerdredge.com.

Mark Dredge is a beer writer, beer judge, presenter and educator. He’s written eight books about beer, has judged some of the world’s biggest beer competitions, is the beer expert on Channel 4’s Sunday Brunch, and regularly develops and hosts beer training, education and tastings, ranging from short online sessions to detailed multi-day education programmes. BeerDredge is his platform for beer education.