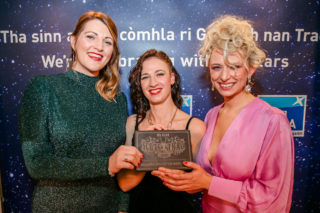 Glasgow-based folk band Kinnaris Quintet have been announced as winners of the Belhaven Bursary at MG ALBA Scots Trad Music Awards in Aberdeen.

Belhaven Brewery, Scotland’s oldest working brewery, currently celebrating 300 years of brewing beautiful beers this year, has been supporting Scottish artists through the Belhaven Bursary for Innovation in Scottish Music since its inception in 2017.

The career changing sum of £25,000 is the biggest financial award for music and was previously awarded to Elephant Sessions in 2017, and Talisk in 2018, making Kinnaris Quintet the first all-female band to scoop the prize.

Winning the judges over with their uplifting and powerful music, the quintet will also be brewing their own beer with Belhaven and performing at the legendary Belhaven Brewery VIP Party in New York during Tartan Week.

Propelling onto the scene with their much-anticipated debut album ‘Free One’ in 2018, fiddlers Aileen Gobbi, Laura Wilkie and Fiona MacAskill, alongside mandolin player Laura-Beth Salter and Jenn Butterworth on guitar make up the band, who mix traditional Scottish and Irish influences with contemporary compositions.

Gordon Muir, Marketing Controller at Belhaven Brewery said: “We are thrilled to award this year’s Belhaven Bursary for Innovation in Scottish Music to Kinnaris Quintet.  Their musical range, innovative arrangements and vibrant stage presence stood out among an amazingly talented shortlist. Since coming together in 2017, Kinnaris Quintet have brought a fresh energy to the trad scene and we look forward to the Bursary helping them spring to the next level.

It has been inspiring once again to see the depth and breadth of innovation in the Scottish folk music scene, with an array of brilliant artists weaving in inspiration from all sorts of genres and cultures to create exciting new sounds.

Belhaven Brewery are proud of our links with this wonderful scene with which we see so much in common – inspired by our traditions and roots, which we use to spur our imagination to create new beers and new music that bring people together for great times.  We are very excited about working with Kinnaris Quintet in 2020 and can’t wait to see where the journey takes us.”

Belhaven Brewery has been marking its 300th year of brewing beautiful beers throughout 2019, with a year long programme of celebrations, culminating in a sell out music festival at the brewery in September. Kinnaris Quintet and eight other outstanding Scottish artists, including Dougie MacLean and Tide Lines performed at the celebration which was attended by fans from across the world.

In addition, Belhaven Brewery launched 1719, a specially brewed birthday celebration pale ale, hosted a birthday reception at the Scottish Parliament, celebrated with 300th birthday parties in all its Scottish pubs, enhanced its brewing and visitor centre experience with £500,000 investment and welcomed Belhaven celebrations in pubs and bars across export nations as far flung as America and Russia.