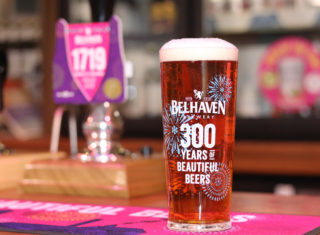 Belhaven Brewery, Scotland’s oldest working brewery, is turning 300 years old in 2019 and is marking its tricentenary birthday with a year-long programme of celebrations.

Belhaven is kicking off the year with:

Founded in 1719 by local man John Johnstone, Belhaven Brewery has been brewing from its historic brewery in Dunbar ever since. It took its name Belhaven, which means ‘beautiful bay’ from the stunning coastal location in East Lothian on which is resides.  Today Belhaven’s meaning is the inspiration for its brewing as it celebrates 300 years of beautiful beers.  The home of Scottish brewing, Belhaven uses only the finest local Scottish barley, water from its brewery well, its own unique Belhaven yeast and the choicest of hops from around the world.

Speaking about the 300th anniversary managing director Matt Starbuck said:  “John Johnstone would no doubt be delighted to see his beloved brewery today, not only the oldest working brewery in Scotland and the home of Scottish brewing but a thriving innovative business and a great Scottish success story abroad. With 30% of all Belhaven beer now enjoyed overseas and a market leading position at home, Belhaven has plenty to celebrate.”

“We are continuing to invest in Belhaven with a new visitor centre opening this year bringing tourism to Dunbar and warmly welcome fans of Belhaven beer to join us in celebrating the brewery birthday this year.”

Launched to celebrate Belhaven’s 300th anniversary, 1719 pours three centuries of brewing expertise into creating a perfectly modern session pale ale. Triple hopped with Centennial for the triple centenary,  along with Mandarina Bavaria and Galaxy hops to produce a clean, bright, mouth-watering pale ale.  The beer is 4.5% ABV and has a citrus and tropical fruit character. It is available on cask, keg and in 330ml bottles throughout 2019.