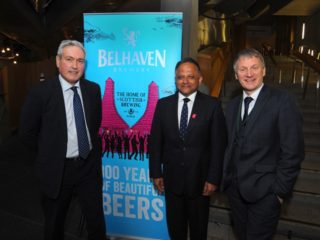 The event took place to mark the milestone and was attended by MSPs, civil servants, councillors, customers and long serving employees.

Minster for Trade, Investment and Innovation, Ivan McKee gave a keynote speech in which he praised Belhaven for its trade in Scotland and overseas as well as investment into the brewery with a new visitor centre experience, enhancing tourism in East Lothian.

Trade Minister Ivan McKee MSP said: “It is fantastic to be able to celebrate the 300th anniversary of Belhaven – it is an iconic brand that has had great success around the world.

“Scottish food and drink is already known and loved around the globe and exporting our finest products is vitally important to the future wellbeing of Scotland. That is why we are continuing to work with the food and drink industry to help them meet their ambitions to double food and drink turnover by 2030. This includes support through our upcoming Export Growth Plan which will set out clear actions to support businesses to maximise the value of Scottish exports.”

Speaking at the event Rooney Anand, chief executive of Greene King, owner of Belhaven said: “Belhaven is Scotland’s oldest working brewery, a proud achievement and one we are delighted to be celebrating as we mark the 300th anniversary. Belhaven’s name, its beers and pubs are a familiar and much loved part of Scottish heritage. Since acquiring Belhaven in 2005 we’ve held Belhaven’s heritage dear whilst developing the business considerably since. Today Belhaven is a powerhouse of modern brewing, crafting over 585,000 pints a week of beer from its state of the art brewhouse, producing twenty different beers and exporting to forty five countries. Exports now represent 30% of trade, up from 10% ten years ago. At home we are pleased to be marking this anniversary with a brand new visitor centre which will open later this summer.”

Iain Gray, East Lothian MSP added: “East Lothian is a food and drink county and it was a pleasure to welcome one of our most iconic brands to the Parliament to celebrate this important anniversary.  The event was a great success, and it was great to share this success story, an important one in our country’s history, and of course the award-winning product with colleagues from across the Parliament.  I look forward to seeing Belhaven’s continued success and will do all I can to aid the further expansion at Dunbar.”