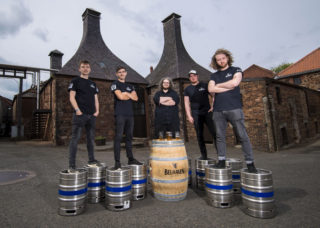 Belhaven Brewery is to host a weekend festival at the brewery this September to celebrate 300 years of brewing beautiful beers.

The ‘Belhaven 300th Birthday Bash’ is set to take place on Saturday 21st September and will be a celebration of the very best of Scottish music and beer.

Belhaven’s story marries 300 years of history with a distinctly modern outlook and the festival line up reflects this marriage of traditional and modern. The main stage showcases the very best in Scottish traditional music and top talent from Scotland’s folk scene over the last three decades.

The line-up includes household names like Dougie MacLean and Capercaillie to innovative new bands like Assynt (‘Up and Coming Artist of the Year’ at the BBC Scots Trad Music Awards 2018) and Kinnaris Quintet.

Multi award-winning Scottish contemporary folk band Breabach are joined by Highland outfit Tide Lines, Niteworks who have become renowned for their fusion of electronica and folk music, and of course Elephant Sessions and Talisk – both winners of Belhaven’s annual bursary for innovation in Scottish music.

Gates open at 11am with the first act taking to the stage at 12pm. Meanwhile the brewery gardens will host family activities including music masterclasses.

There will be food stalls featuring delicious choices as well as Belhaven Brewery and bands merchandise stalls.

Gordon Muir, Belhaven Brewery’s marketing controller and festival organiser said, “It’s not every year you get to mark a milestone as big as 300 years and so we wanted to celebrate this with Belhaven’s two loves, beer and Scottish music.  Belhaven’s 300th Birthday Bash is the ultimate party for those fans and our loyal customers who enjoy nothing more than a few beers and great live music.

“We’ve plenty of things for the whole family to do including story-telling and games for youngsters, selfie sessions and music masterclasses for the teens and beer tastings and brewery tours for the adults.

“The line-up demonstrates the breadth and vibrancy of the Scottish folk scene at the moment. Many of these bands have travelled the globe performing their tunes in Sydney Opera House, Byron Bay, America and more, while Tide Lines sold out their November Barrowlands show in just six minutes, so this event is a great opportunity to see some of the most in-demand traditional artists play in the fantastic setting of our brewery in Dunbar.”

The chilled out vibe continues on Sunday 22nd September, with the brewery hosting an open day between 11 and 5pm. For half the usual price, visitors can enjoy a brewery tour and finish off in the brewery garden to enjoy a pint or two or a bite to eat in the relaxed surroundings.

Tickets are now on sale at www.tickets-scotland.com/Belha Saturday’s music festival is £25 per person with children under 12 free.* Sunday’s brewery open day is £5 per person. Full details including information on the bands are available at www.Belhaven.co.uk/Birthday-Bash

Belhaven Brewery, Scotland’s oldest working brewery has been producing a diverse range of delicious and vibrant beers from its historic brewery in Dunbar since 1719. It took its name Belhaven, which means ‘beautiful bay’ from the stunning coastal location in East Lothian on which is resides.  Today Belhaven’s meaning is the inspiration for its brewing as it celebrates 300 years of beautiful beers.

These include Scotland’s best-selling beer, Belhaven Best alongside award winning craft beers such as Twisted Grapefruit IPA, Beer of the Year at the Scottish Beer Awards 2018.  From traditional ales to its easy-drinking stout, Belhaven Black, all Belhaven’s beers are brewed with 100% Scottish barley malt, water from its own well and its unique Belhaven yeast. Belhaven beers are exported as far as USA, Russia, Sweden, France and China with exports now amounting to 30% of all Belhaven beers brewed each year. Belhaven Brewery was awarded Exporter of the Year from the Scottish Beer Awards 2018.