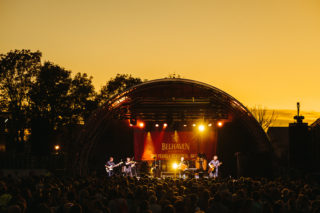 Belhaven Brewery has celebrated 300 years of brewing beautiful beers in style this weekend, hosting the ‘Belhaven 300th Birthday Bash’ at its brewery in Dunbar.

The festival, coupling the very best in Scottish music and beer, was a sell out with thousands of revellers enjoying the festivities on Saturday, 21st September.

The event line-up reflected Belhaven’s 300-year-old history and its distinctly modern outlook, with the very best in Scottish traditional music acts and top talent from the folk scene over the last three decades taking to the stage.

Assynt, who were crowned Up and Coming Artist of the Year at the BBC Scotland Trad Music Awards 2018, opened the stage, getting the crowds warmed up before Kinnaris Quintet performed their dynamic and compelling live set.

The sell-out party ended with an unforgettable set from Scottish stalwarts Capercaillie, before Niteworks, renowned for their fusion of electronica and folk music, brought the celebrations to an electrifying close.

Gordon Muir, Belhaven Brewery’s marketing controller and festival organiser said: “Belhaven’s 300th Birthday Bash was the ultimate party and it was fantastic to have thousands of our loyal customers and fans along to the brewery to celebrate with us.

“It’s not every year you get to mark such a momentous milestone and combining Belhaven’s two loves, beer and Scottish music, was the perfect recipe for success with sell-out crowds enjoying the festival.

“It was a joy to have some of the most in-demand traditional artists playing in the unique setting of our Dunbar brewery and to welcome so many families along to enjoy our music masterclasses, storytelling and sport sessions. It certainly was a weekend to remember.”

The celebrations continued on Sunday 22nd September, with the brewery hosting an open day in the relaxed surroundings.

Belhaven Brewery, Scotland’s oldest working brewery has been producing a diverse range of delicious and vibrant beers from its historic brewery in Dunbar since 1719. It took its name Belhaven, which means ‘beautiful bay’ from the stunning coastal location in East Lothian on which is resides.  Today Belhaven’s meaning is the inspiration for its brewing as it celebrates 300 years of beautiful beers.

These include Scotland’s best-selling beer, Belhaven Best alongside award winning craft beers such as Twisted Grapefruit IPA, Beer of the Year at the Scottish Beer Awards 2018.  From traditional ales to its easy-drinking stout, Belhaven Black, all Belhaven’s beers are brewed with 100% Scottish barley malt, water from its own well and its unique Belhaven yeast. Belhaven beers are exported as far as USA, Russia, Sweden, France and China with exports now amounting to 30% of all Belhaven beers brewed each year. Belhaven Brewery was awarded Exporter of the Year from the Scottish Beer Awards 2018.

Belhaven was acquired by Greene King in 2005. Greene King currently employs around 38,000 people including 3000 in Scotland across its main trading businesses; Pub Company, Pub Partners and Brewing & Brands.