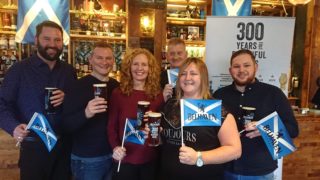 Six pub licensees from across Scotland have been rewarded with the perfect start to the New Year. The licensees, who all manage Belhaven pubs, have won a trip of lifetime to New York in April to take part in the 2020 New York Tartan Day Parade.

Each managed the top performing pub in their region throughout 2019 to champion Belhaven Brewery beers during the brewery’s 300th year celebrations.  Scotland’s oldest working brewery, which is based in Dunbar, hosted a year of celebrations to mark the milestone from parties in the pubs to a music and beer festival at the brewery in September.

The winning licensees are from Molly Malones in Glasgow, Central Bar in St Andrews, Prince of Wales in Aberdeen, The Granary Bar in Dumfries, Stumps Bar in Glasgow and Beehive in Edinburgh. Each pub manager will jet off for the four day weekend to the Big Apple and take part in the annual Scottish parade, the largest outside of Scotland, which is sponsored by Belhaven Brewery.  They will be joined by best performing Business Development Manager Rhys Worthington. The six pubs achieved the highest like for like growth in Belhaven Brewery beers during the 300 day birthday celebrations.

Joining the Belhaven team in New York will be Scottish folk band, Talisk, 2018 winners of the Belhaven Bursary for Innovation in Scottish Music who will perform during the parade.

Matt Starbuck, managing director, Belhaven Brewery said: “We are delighted to announce the winners of our 300 birthday New York Tartan Week competition. Thank you to them and all licensees who totally embraced our big birthday year, successfully selling Belhaven’s range of beers from Scotland’s favourite pint, Belhaven Best, to award winning craft IPAs like Twisted Thistle and Twisted Grapefruit and of course 1719, our delicious celebration pale ale. We had a blast with a phenomenal year of celebrations supported by Belhaven’s thousands of fans from all across the globe.”

Paul McDonald from the Prince of Wales, Aberdeen said:
“Winning the trip is the icing on the cake after a fantastic year of birthday celebrations. 300 years is an incredible achievement and our customers loved getting behind the milestone.”

Kenny MacKenzie, Operations Director, Belhaven Pubs added: “Congratulations to our winners who truly deserve to be rewarded with this prize after all their hard work and effort. The enthusiasm from across all our teams for Belhaven’s 300th year was impressive with significant uplift in sales of our Belhaven beers. As we head into our 301st year we do so with momentum and loyalty for our great brands.”

Each pub chose to host their own celebrations and were supported with party packs and POS including 300th birthday glassware.

About Belhaven Brewery
Belhaven Brewery, Scotland’s oldest working brewery has been producing a diverse range of delicious and vibrant beers from its historic brewery in Dunbar since 1719.  These include Scotland’s best-selling beer, Belhaven Best alongside award winning craft beers such as Twisted Grapefruit IPA, Beer of the Year at the Scottish Beer Awards 2018.  From traditional ales to its easy-drinking stout, Belhaven Black, all Belhaven’s beers are brewed with 100% Scottish barley malt, water from its own well and its unique Belhaven yeast. Belhaven beers are exported as far as USA, Russia, Sweden, France and China with exports now amounting to 30% of all Belhaven beers brewed each year. Belhaven Brewery was awarded Exporter of the Year from the Scottish Beer Awards 2018.