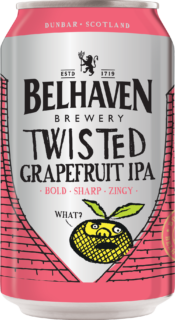 Belhaven Brewery’s Twisted Grapefruit IPA has been named Beer of the Year 2018 at the annual Scottish Beer Awards.

Scotland’s oldest brewery, which is set to celebrate its 300th anniversary in 2019 has received the honour for its innovative twisted fruit beer. In addition to the top award the hoppy fruit flavoured IPA won the Gold taste award for ‘Best Fruit-Forward beer’. The award was judged by a panel of experts drawn from across the sector from almost 300 entries.

In addition Belhaven received Silver in the ‘Best British-style Beer’ category for 80 Shilling and regained the title as ‘Exporter of the Year’ for the second time.

Speaking after the award win Belhaven Brewery’s marketing controller Gordon Muir said: “This award is a tremendous accolade for Belhaven and, needless to say, reflects the outstanding job the brewing team are doing! We were inspired on a trip to the United States two years ago by the phenomenal rise in fruit and tropical IPAs and we saw immediately that it was a style we’d be able to do well.”

Matt Starbuck, managing director added: “With our 300th anniversary just months away this award is testament to the brewery’s ability to embrace our heritage whilst continuing to create cracking beers to reflect new trends and tastes.”

The Twisted Grapefruit IPA recipe is designed to emphasise citrus hops while having a big malt character that is juicy and mouth-filling but not heavy or sweet. The hops used, Chinook and Mandarina Bavaria, are super fruity and zesty so the base beer has plenty of that hop character which is then further enhanced with fresh grapefruits for a satisfying pithy finish.  Using a special infuser the beer is repeatedly filtered through a bed of chopped grapefruits giving the beer loads of contact with every bit of the fruit. The juice, pulp, pith, skin & oils all contribute to the big and amazingly fresh fruit aroma and flavour.

Twisted Grapefruit first appeared as a rotational keg beer in November 2016 and was such a hit it was quickly made a permanent beer and put it into cans the following year. It’s now available in the on trade and in Tesco and Morrisons stores UK wide as well as key export markets.