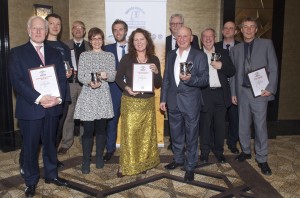 The British Guild of Beer Writers yesterday (4 December) presented their top award, Beer Writer of the Year 2014, to bloggers and writers Boak & Bailey.

The Beer Writer of the Year award is the ultimate accolade for anyone communicating about our national drink. Entries to this year’s competition included press articles, books, radio shows and blogs on a wide range of beer and pub-related subjects.

Boak & Bailey took the top title for their book, Brew Britannia, published earlier this year. The couple – real names Ray Newman & Jessica Slack – have been blogging since 2007, but Brew Britannia, an account of beer’s ‘rebirth’ since the 1960s, is their first book.

Accepting the prize, Boak & Bailey said, “We’re surprised, delighted and honoured to win this award. We never expected Brew Britannia to receive the attention it has had and are grateful to everyone who helped us to write it, bought it or reviewed it.  Winning this award has really made our year.”

Will Hawkes, Beer Writer of the Year 2013, and chairman of judges this year, said: “2014 has been a good year for beer and by extension for beer writing. The number of new brewers entering the market, the diversity of beers brewed by them, and the growth of pubs and bars dedicated to craft beers, means there is no shortage of material for beer writers.

“We were impressed with the quality of entries received from all corners of the beer writing and blogging world. Boak & Bailey’s book presented an entertaining, informative and rigorously researched view of recent beer history and is a worthy winner.”

He added, “The Young Beer Writer award, introduced this year, received a good response from new writers whom we were able to judge without competition from more established names. We’re delighted to be fostering new talent in this way.”

The Guild’s Brewer of the Year Award was presented to Mark Tranter, founder of Burning Sky Brewery in East Sussex and formerly of Dark Star. Guild chairman Tim Hampson said: “Mark made Dark Star one of the most forward thinking of the new wave of British breweries with beers such as Coffee Pilsner, Revelation, Six Hop and Espresso. At Burning Sky he has produced pale ales, session bitters and IPAs, bright and bold in flavour, alongside a range of beers that are being aged in a variety of wooden barrels; his Flemish red was a dream, while Saison a la Provision is one of the best British saisons around.

“Mark’s work has become an inspiration for many other brewers and he is a fantastic advocate for beer culture who has shown a great willingness to share his ideas.”

The complete list of winners named at the event at the Carlton Jumeirah Hotel in Knightsbridge was:

Young Beer Writer of the Year

The Michael Jackson Gold Tankard  for Beer Writer of the Year 2014: Boak & Bailey

The British Guild of Beer Writers was established in 1988 to help spread the word about beer and brewing and improve standards of beer writing in general. Today the Guild has around 220 members – to find out more go to www.beerwriters.co.uk.

Go to for photos from the event http://cath.smugmug.com/BGBW-Awards-Dinner-2014/n-rLXKc

Caption to attached image: winners of the Guild of Beer Writers’ annual awards 2014