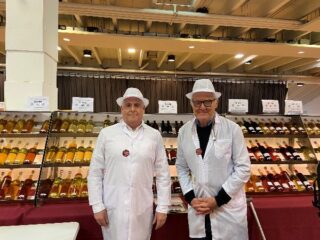 Guild members Tim Hampson and John Porter were well tuned out when they made their annual judging trip to the National Honey Show in October. Tim and John were kitted out in white coats proudly bearing the Guild logo, topped off with white trilby hats.

John explains: “It’s over 10 years since the Guild was first invited by the British Beekeepers Association to send a team to judge the beer categories at the annual show. All the other judges sported food safety standard white coats and trilbies, and while Tim and I have sometimes been able to borrow some on the day, we thought it was high time we protected the honour of the Guild and had our own.

“This year, we had special judging coats made, with the guild logo on the pocket, and acquired trilbies. We always end up working next to the judges in Mead categories, who are very well turned out, so this year we looked equally smart. We’re always made very welcome by the BBA, and we wanted to show them we take the responsibility of judging seriously.”

The categories judged by Tim and John include commercial beers using honey as an ingredient, entered by the brewers, as well as home-brewed honey beers and braggots, the latter being a kind of hybrid between mead and beer.

John says: “Over the years, we’ve seen the quality of the home brewed honey beers improve immensely. Honey is quite a complex ingredient to use in beer, and it’s easy to either make the beer too sweet, or lose the essential beer character entirely. This year though, all the home brews were excellent.”

The Best in Show award, picked from both the commercial and home brews, this year went to Elusive Brewing’s Bee Strong, a 10% ABV wee heavy style ale. “We’d really like to encourage more commercial brewers to enter their honey beers,” added John.  Details can be found at  www.honeyshow.co.uk.