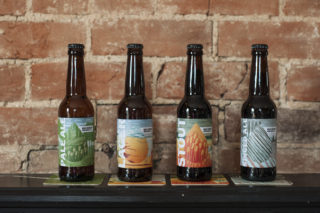 Big Drop Brewing Co has announced a series of partnerships as it prepares to expand distribution of its range of 0.5%ABV beers into new markets.

Original Brands has been retained to work with UK premium drinking and dining outlets and leading routes to market to secure brand growth in the sector whilst export opportunities will be handled by The British Bottle Company as Big Drop seeks to meet the demand for lower ABV craft beers overseas.

Announcing the appointments Big Drop founder, Rob Fink, said “Our beers have established a compelling reputation and loyal consumer following, particularly since winning recognition in the 2017 World Beer Awards and International Beer Challenge.  It’s important to build on this interest to establish them in the market place and Original Brands is well-placed to maximise our presence in the top drinking and dining sites in this sector.”

Big Drop’s first beer, a Stout, won a Gold Medal at the International Beer Challenge and UK Silver medal in the stout and porter category of the World Beer Awards whilst its Pale Ale claimed the title of World’s Best Pale Beer, low strength, at the World Beer Awards.  Fink has recently added to the company’s accolades, being named Innovator of the Year at the New Producer Awards 2017.

Commenting on the appointment, Nick Worthington, Director of Original Brands, said “We have proven experience in placing brands in the right outlets and developing long-term and profitable listings which are appropriate to the outlets operating style.  Big Drop has created a distinctive offering that provides a range of craft beers with depth of flavour as an alternative to the current low and no alcohol drinks category.  I’m excited that Original has been selected as a partner and look forward to speaking to premium outlets who are keen to give their customers a quality, full flavoured option for lower alcohol occasions.”

The leading UK craft brewer to focus exclusively on 0.5% ABV beers has also appointed The British Bottle Company to handle its sales in the expanding overseas market.  “We have already secured a significant order that will see listings of Pale Ale in 430 stores in Sweden” said Fink “which demonstrates that demand is not limited to the UK.  By appointing The British Bottle Company we expect to reach a much wider audience and are thrilled that a contract to supply an importer in Japan has already been secured.”

Both contracts signify Big Drop’s commitment to offer retailers and drinkers genuine options by revitalising the low alcohol drinks category. The range of four beers provide a credible choice for the growing number of consumers who choose to moderate their alcohol consumption but are not content to compromise on the depth of flavour of their beer.

Big Drop was the first UK brewing company to be devoted exclusively to making the finest <0.5% ABV beer after founder, Rob Fink, identified a lack of choice in low/no alcohol beers.  Further research revealed a gap in the market for a craft brewery dedicated solely to production of great quality, low alcohol beer that was full of flavour.

In August 2016, Rob and design supremo James Kindred established Big Drop Brewing Co with Johnny Clayton, former brewer at Wild Beer and one of the finest experimental brewers in the business, embracing the challenge and joining a month later.  The rest is history in the making!

Original Brands is a ‘Brand Incubator’ fertilising, nurturing and growing brands in the UK and across Europe.

Original Brands works in partnership with passionate brand owners that champion original, inspiring and challenger brands from around the world. They are experts in building brands in the UK and Europe utilising our teams 50+ years of industry experience in sales and marketing, getting brands into the right hands.