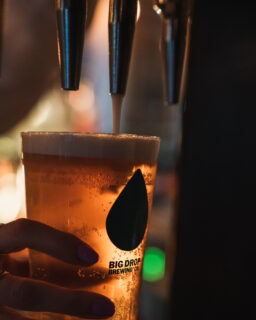 The number of venues where alcohol-free beer is available on draught this January has had a boost, thanks to Big Drop being trialled by the Mitchells & Butlers pub group.

With Big Drop already sold in bottles across much of the M&B estate, 43 venues – in London, Bournemouth, Bristol, Oxford, Leeds and Newcastle – now also have Big Drop’s 0.5% ABV Paradiso Citra IPA on tap. This takes the total number of places in the UK where Big Drop supplies kegs to over 200 for the first time.

Other venues include Brewhouse & Kitchen, Barworks and Surrey’s Sit Up & Sit group to name a few. Some are running ‘Try January’ promotions to entice customers and help enlighten those new to AF beer. For example, the Fugitive Motel in Bethnal Green has a ‘first pint on us’ giveaway on Friday evenings while Sit & Sip has the same offer all day Thursdays . Plus, visitors to Club Soda’s Central London pop-up off-licence can also sample a Big Drop Paradiso on tap.

As a ‘World’s Best’ title winner at the 2021 World Beer Awards, Paradiso also won a full-strength IPA category in the 2020 competition, beating 6% beers into second and third place. With Chinook, Cascade, Simcoe, Citra and Columbus hops, it’s a delight for fans of fruity, crisp beer. Pale in colour but robust in flavour and very refreshing, it has a sharp twist of bitterness on the end that makes you want to dive back in for more.

Rob Fink, Co-Founder and CEO of Big Drop, commented: “It may be a popular month for abstaining from booze but that needn’t mean abstaining from pubs. This year, AF on draught will become the norm all year round and we’re 100% focussed on making sure those ordering one will have a beer so good they won’t miss the alcohol.”

For samples, drop an email to sales@bigdropbrew.com or buy one of its Big Hello packs online at https://shop.bigdropbrew.com/. Priced £14, the Big Hello pack contains Big Drop’s four most popular 0.5% ABV beers – including Paradiso, Pine Trail Pale Ale, Galactic Milk Stout and Uptime Craft Lager, two of each in 330ml cans.

About Big Drop: Big Drop was launched in 2016 as the world’s first brewer dedicated to alcohol-free beer by City lawyer, Rob Fink and long-time friend James Kindred. Both had recently become fathers and were looking to cut back on the booze but could not find any decent alternatives to their favourite craft beers. Big Drop contract brews in batches through a network of brewing partners worldwide, meaning it can produce fresh beer – locally and ethically – with a minimal carbon footprint. Recognised as the market leader in the rapidly growing AF craft beer sector, Big Drop has won over 80 international beer awards including seven times World’s Best at the World Beer Awards. It can now be found in over 10,000 locations – including throughout Europe, Australia, Canada and the US. In the UK, Big Drop has listings with retailers (eg Sainsbury’s, Waitrose, Morrisons and Ocado) as well as on doorsteps with Milk & More. Its range of beers, which are all <0.5% abv, currently consists of: Stout, Lager, Pale Ale, IPA, Brown Ale, Golden Ale, Hazelnut Porter and a Sour as well as special editions and collaborations with other leading brewers. For more information about Big Drop’s beers, tasting notes and availability, visit www.bigdropbrew.com.