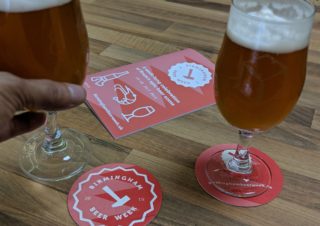 There are less than 7 days to go until Birmingham Beer Week 2019. An annual calendar of events that unites the city’s finest breweries, pubs, bars, bottle shops and restaurants, in creating a whole array of fun and exciting events with good music, food and of course GREAT BEER!

Over 60 events will be held across more than 50 venues around Birmingham, showcasing the best of what this city’s beer scene has to offer. With 16 independently operated breweries within our city complimented by breweries in the wider Midlands, they are the heart of the Birmingham beer scene and are beginning to be noticed further afield.

Birmingham is a city that is developing a culture of beer tourism, with interest from beer enthusiasts and the beer industry who are looking into our city as the next region of growth and rightly so with new breweries and bars are opening around the city at a pace and the amazing local food scene continuing to embrace the beer culture.

Launching during #BrumBW19 is our collaboration beer – “Zwillinge”. Gathering 7 Birmingham breweries; Attic Brewing, Birmingham Brewing Co, Davenports, Halton Turner Brewing, Lab Culture Brewing, Ostlers Brewery and Two Towers Brewing working together to create this beer. The beer is a Raspberry and Basil fruited Gosé; tart, sour and with a defined saltiness that this classic style demands but with an added a twist that will make it approachable to both casual and seasoned drinkers alike. So how does Gosé a beer native to Leipzig in Northern Germany relate to Birmingham? Birmingham has maintained a twinned city relationship with Leipzig since the 1980s and it is this fact that both inspires the beer and its name; Zwillinge being a literal translation of the word “Twins”.

This year’s beer week comes at a time when Birmingham’s craft beer scene is looking stronger than ever – and it’s only going to become more visible on the national stage. We also hope to see our city further embrace the beer culture and all it can offer.

For all the latest event information head to our website www.birminghambeerweek.uk.

Birmingham Beer Week is a Not-For-Profit venture set up to help promote the growing beer scene in Birmingham with the help of its beer businesses by creating a week of events and promotions across the city celebrating the beer scene in all its forms by creating a common branding to promote venues and the events they create.