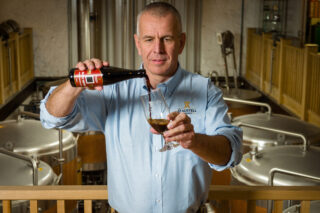 St Austell Brewery’s Russian Imperial Stout, Black Square, is back due to popular demand – just in time for Christmas. This year’s batch is even more special as it’s the last brew by the company’s much-loved former Brewing Director, Roger Ryman – who sadly passed away in May. For each case sold, £2.50 will be donated to St Austell Brewery’s Charitable Trust, which supports the work of local charities and good causes across the West Country

2020 Vintage Black Square (10.6% abv) was brewed last December and has spent the year maturing in bourbon barrels, to bring the stout to its very best condition. Strong, rich and complex, this powerful beer carries a rich balance of tannic oak, bitter chocolate and berry fruit. Since 2016, it’s been brewed annually by St Austell Brewery – between Christmas and New Year – for a special limited release the following winter. Only 4,000 bottles are available each year.

Black Square was originally conceived and brewed by Roger Ryman, alongside the team from Moscow’s New Riga’s Brewery. The award-winning partnership resulted in Black Square being released in keg into the Russian market and quickly became one of New Riga’s best-loved craft ales.

Rob Orton, Production Manager at St Austell Brewery said: “Black Square is such a special beer and one that was really close to Roger’s heart, fulfilling his lifelong dream of winning a gold medal at the International Brewing Awards. This batch was Roger’s last brew and we’re excited to share it with people – both those who are long-time fans of the beer and those who want to try it for the first time.”

To celebrate his legacy, St Austell Brewery is encouraging everybody to say ‘cheers to Roger’ at 6pm on Saturday 28th November. This would have been the date of the company’s 22nd Celtic Beer Festival, had it not been cancelled due to Covid-19.

Rob explained: “Roger first started the festival in 1999, when he joined the brewery, to give people the opportunity to try more of our small batch brews and to showcase the very best beers from across the West Country. It was always the highlight of his year, so it feels fitting to raise a beer to Roger – who we all miss hugely – on what would have been the day of our 22nd festival.

“We’re asking people to join us in a virtual tribute to Roger by posting their personal tributes or a photograph of themselves raising a beer to him, on social media next weekend. Please tag us in your posts and use #CheersToRoger.”