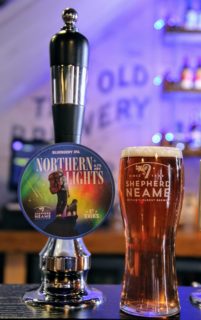 Shepherd Neame might be Britain’s oldest brewer but it’s anything but old-fashioned, as demonstrated by its latest collaborative brew.

A peach-pink coloured Blueberry IPA has just been unveiled by the Faversham Brewery as part of its Cask Club range of experimental, innovative ales.

Northern Lights (4.7% ABV) is a collaboration with the Swedish brewery St Eriks, and combines the cask brewing expertise of Shepherd Neame with a distinctly Swedish twist, namely the addition of both fresh and dried Swedish Blåbär blueberries to the beer.

David Peuriere, Head Brewer at St Eriks, travelled to Faversham to work alongside the Shepherd Neame team on the beer last month.

He said: “At St Eriks we have brewed with blueberries before, usually in porters and stouts, but we wanted to brew a lighter beer for this collaboration. The blueberries don’t really have much of an aroma, but they have a great mouthfeel and colour. Combining them with hops has given us a great cask beer.”

Shepherd Neame Brewery Manager Rupert Hodgkins worked closely on the beer alongside David. He said: “This is the latest of several international collaborative brews in recent months for our Cask Club range. Our aim is always to bring to life the essence of each of the partners we work with while also showcasing our brewing expertise. On this occasion, we wanted to create something that was really different, using ingredients with Swedish provenance, and we are delighted with the finished result.”

Although Shepherd Neame has worked with other members of the St Eriks brewing team before, on a Golden Ale titled Midnight Sun in 2017, this was David’s first visit to the historic Faversham Brewery.

He said: “We have a very modern brewery in Sweden, so it has been a fascinating experience to brew in the historic surroundings of Shepherd Neame. The team has been really welcoming and I feel that we have created something very special.”

Northern Lights has a peach-pink tinge in the glass, light fruit aromas on the nose and citrus flavours on the palate. The beer is generously hopped with Citra. It will be available throughout October and early November.

Cask Club Brand Manager Rose Davis said: “We launched Cask Club earlier this year to celebrate modern styles and flavours, and this type of exciting international collaboration is exactly what we hoped to achieve. We want to encourage more people to enjoy what we believe is one of the best drinks in the world.”