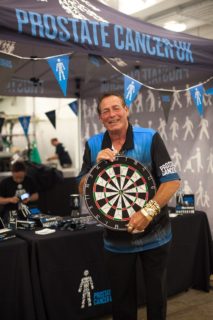 The leading men’s health charity launched its second year of the competition at the Great British Beer Festival  on 8th August. This comes as part of its Men United Arms campaign, encouraging pub, club and bar licensees to raise awareness amongst their customers, and funds to help beat prostate cancer.

Darts legend, Bobby George, who attended the festival yesterday, said: “It’s great to be able to support on such an exciting campaign. The pub is the hub of a community which is why it is so important that licensees start raising awareness among their locals, and funds for this cause. Plus, it is a great way to get customers at your bar!”.

Pubs, clubs and bars can sign up and have until 31st March 2018 to raise as much money and awareness as they can. On registration, everyone will receive a kit including beer mats, bunting and posters, and all pubs who raise over £200 will be automatically entered into a competition with the chance of winning branded drip trays and t-shirts.

The top five fundraising pubs in the UK will then be shortlisted in the running to become Prostate Cancer UK’s favourite local. A panel of industry experts, including Bobby George and MasterChef’s Gregg Wallace, will nominate their winner based on the amount raised, most innovative idea, customer involvement, and their commitment to their local community.

For the first time, the charity has also introduced further categories for pubs to win, including awards for Favourite Landlord, Heart of the Community and Top Fundraising Pub, with additional prizes being awarded.

Last year, The Par Inn, in Cornwall was named Prostate Cancer UK’s favourite local 2017. Landlord Matt Bailey took the competition in his stride and raised an incredible £4,120 by hosting a BBQ, two auctions, a raffle, card games, charging for bar food, donations for lifts and general donations on the bar.

Landlord Matt said: “I first signed up to this when one of my local boys who had just been diagnosed with prostate cancer, told me about the competition. I didn’t think twice about doing it and we suddenly all got very competitive about winning.

“Running events and fundraisers is a great way to get people into your pub too which has in turn helped my profits as well, I definitely encourage all landlords to sign up. This competition got the whole community together, everyone in the area got really behind it and in turn spent more at the bar as well as raising money for the charity!”

James Beeby, Director of Fundraising at Prostate Cancer UK said: “I couldn’t think of a better way to start our search for Prostate Cancer UK’s favourite local than at the Great British Beer Festival. We need landlords to join others across the country and come together to support their customers in helping beat this disease.

“Prostate Cancer affects every community. 1 in 8 men will be diagnosed in the UK and 1 man dies from prostate cancer every 45 minutes. I encourage all landlords to turn their pubs into a Men United Arms to help us save men’s lives.”

To sign up for a fundraising pack or receive more information visit prostatecanceruk.org/menunitedarms