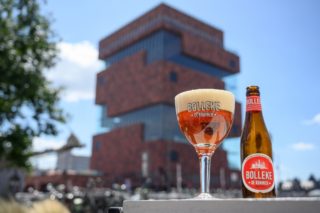 The De Koninck brewery has taken the revolutionary decision to allow the people of its home city, Antwerp, to rename its biggest selling beer.

So move aside Boaty McBoatface: The ‘Bolleke’ is coming.

Despite the beer’s long-standing moniker of ‘De Koninck’, named after the brewery itself, Antwerp citizens refused to order the beer by its real name, choosing instead to ask for their dearest “Bolleke”. Their dogged persistence has paid off, as the city brewery is now throwing in the towel and joining the residents in the new name.

“Bolleke” has for decades been the endearing term for the bowl-shaped chalice in which that legendary beer is served, a Belgian amber-coloured pale ale, with a malty, slightly hoppy character, and hints of caramel and cinnamon.

“Bolleke” is traditionally brewed using water, yeast, 100% pure malt and hops. Only natural barley is used and no maize or brewing sugar is added. The beer owes its gently bitter backbone to its Saaz-Saaz hops, but the main character is of a pleasing speciality beer with rich warm flavours and an ABV of 5.2%.

“There is precedent for public votes on re-namings: some have gone better than others.

“The gently surreal Boaty McBoatface gained a massive public vote as the name for the $287 million polar research ship instead of sensible names like Shackleton, Scott or Endeavour – but it was quietly discarded.

“Marathon bars renamed themselves Snickers in 1990, against public opinion, and have done incredibly well ever since; but when Coco Pops became Choco Krispies in 1998 the public mood snapped (and crackled & popped), and they reverted to Coco Pops less than a year later.

“In total contrast, ‘Bolleke’ is a hugely popular re-naming. The Bolleke glass has been synonymous with this elegant beer all over the world, and there is no other beer worldwide which is so defined by its glass.

The new “Bolleke” is available in Belgo restaurants, specialist beer shops and bars around the UK.

The De Koninck Brewery is now home to a cheese shop, bakery, chocolatier, cycling shop butcher’s shop, and both a BBQ restaurant and Michelin starred restaurant. The brand new brewery experience is unlikely to be like anything you have seen before, with 10 interactive rooms discovering the history of the brewery and its umbilical connection with the city.

Since 1833, De Koninck’s beers have been brewed on Mechelsesteenweg in Antwerp. The brewery is proud of its close links with the city, from rugged docks and full terraces, to cargo bikes and summer evenings on the Scheldt. The entire city of Antwerp contained in one bottle. That love is mutual: People from Antwerp hold their favorite beer close to their hearts and never have to look far for a freshly pulled “Bolleke”. You will find the Antwerp icon not only in the De Koninck Bar in the brewery itself, but also in every café and bar in the city.