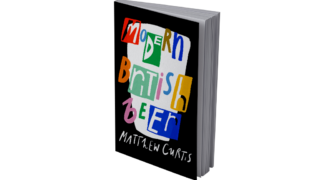 Beer lovers can immerse themselves in a new title from CAMRA (the Campaign for Real Ale), marking how the past two decades have shaped the British beer scene.

CAMRA has PDF copies of the book available for review and serialisation now. Physical copies can be provided upon request within the next few weeks. Modern British Beer is now in pre-orders with copies officially available on 12 August 2021.

The new title looks at how the British beer scene has taken its cue from the craft beer revolution in the US and the resurrection of traditional styles in Continental Europe, as well as some home-grown traditions. As a result, the brewers of Great Britain and Northern Ireland have carved out a unique and exciting world-leading beer culture.

Matthew gives a personal insight into this eclectic and innovative world, using a selection of 86 influential brews; from how they taste, how their ingredients are sourced, to the engaging stories of the people behind the scenes working hard to bring exciting beer to drinkers all over Britain. With a regional dive into who the movers and shakers are in the eclectic world of beer and brewing across Britain, Modern British Beer will help readers source, discover and fine tune their appreciation of beer.

Author Matthew Curtis said: “I am very excited to be sharing Modern British Beer and celebrating just some of the industry’s success in the 21st century. This past year has been an incredibly difficult one for the beer and pub industry, and I hope readers will enjoy looking back on the fantastic journey the beer scene has undergone in the UK over the past 20 years, while looking ahead to supporting the industry in the forthcoming months and helping it thrive for another 20 years (and long beyond!)

“Modern British Beer is a fantastic starting point to explore British beer, with an exciting location closer than you think. This book is about why modern British beer is important. Whether it’s a can or two at home, a bottle generously shared with friends, a quick pint at the local, or a night of revelry to mark a milestone moment, British beer is really coming of age and deserves to be celebrated.”

Modern British Beer is available for pre-order now for £13, or £16 for a signed edition. It will officially go on sale from 12 August 2021.

If interested in a review copy or to discuss different opportunities, please do get in touch on press@camra.org.uk

To find out more about the book, visit https://shop1.camra.org.uk/product/modern-british-beer/