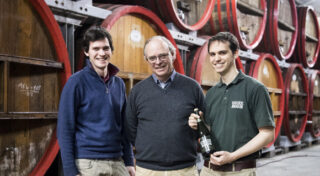 The Black Label Edition N°7 was bottled on June 8, 2021. This sparkling Oude Geuze has a round, mellow taste with notes of citrus and apricot.

The Brussels Beer Challenge was organised for the first time in 2012. This year, more than 1800 beers took part in this international competition. They were classified into 64 categories based on their origin, specificity, and style. A jury of 75 internationally renowned beer experts blind-tasted the beers. The best beers in each category got a gold, silver or bronze award.

About Brewery Boon
Frank Boon started in the Lambic world in 1975. He is one of the pioneers who put the Oude Geuze on the map worldwide. Recently, Jos (31) and Karel (27) Boon took over from their father. In 2020 Boon produced more than 22,000 hectolitres. With more than 2 million litres of Lambic, the Boon brewery has the world’s largest stock of Lambic in oak barrels.
www.boon.be