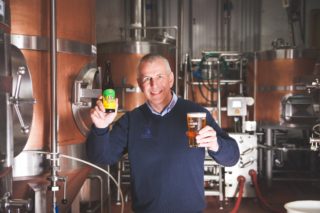 In the spirit of its award-winning approach to collaborative working, St Austell Brewery’s latest team effort sees Brewing Director Roger Ryman working alongside Nick Sterenburg, Operations Director of Cooper’s Brewery in South Australia on a collaboration between two breweries in different corners of the world sharing brewing techniques and the commitment to exacting standards. But there’s also a fair dose of history thrown into the mix as well.

In 1851, Walter Hicks, a Cornishman with a vision, set up St Austell Brewery in Cornwall. Just a year later Thomas Cooper, a tradesman from Yorkshire, set sail on a ship from Plymouth bound for South Australia and in 1862, he used an old family beer recipe to help his ailing wife recover from illness. Noting the efficacy of his treatment, he went on to set up a major brewing enterprise much like his Cornish counterpart in St Austell.

Over 155 years later, the two successful breweries share a commitment to brewing beers of a high standard, creating naturally conditioned beers and a pride in upholding their historical brewing traditions while moving with the times and adopting modern technology.

Miss Nancy Blair came about as a result of a trip back to the UK by Cooper’s Operations Director last year, as Roger Ryman explains, “Nick Sterenburg was on holiday in Fowey over Christmas and the new year and he contacted me to see if he could visit for a brewery tour. I suggested that we could do better than that, and proposed that we brewed a beer together.” The rest, as they say, is history.

What brings St Austell Brewery and Cooper’s even closer together is that the Aussie firm’s signature beer is ‘Sparking Ale’ – a rarity in Australia as it is a traditional ale, re-fermented in the bottle –known over here as bottle conditioned beer, traditionally served unfiltered and hazy. With Big Job picking up the CAMRA Champion Bottled Beer of Britain award in 2017 which judges the very best bottle conditioned beers made in the UK, Roger Ryman has long been an advocate for the beer style.

And what’s in the name? Miss Nancy Blair is, of course, a feature of the popular sea shanty South Australia where old Thomas Cooper was bound for in 1852. Made with Galaxy and Melba hops from Tasmania, the beer will be available week commencing 16th April as a Small Batch Brewery 4.8% cask ale in pubs that are part of the St Austell Small Batch Beer Club and at the Brewery’s Visitor Centre Hicks Bar until stocks last.

A 5.3% abv bottled version, including an increased helping of Galaxy hops to make the bottled Miss Nancy Blair a real hop-bomb, will be available from the St Austell Brewery Visitor Centre shop or from the Brewery’s online shop www.staustellbreweryshop.co.uk in May.